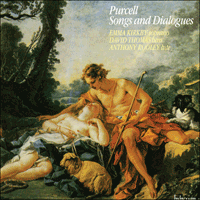 ‘Innocently sexy in the most charming way. Emma Kirkby can never have sounded more celestial. The sound quality is immaculate. This is a lovely record and I recommend it strongly’ (Gramophone)
‘A source of joy unconfined. This lovely issue is as commendable as any I have ever reviewed’ (Hi-Fi News)

The Restoration Folio Songbook which has preserved and shaped the music on this record is only superficially an elegant object. The visual promise of the title page is seldom fulfilled by the rough-and-ready look of the typeset music inside. Yet, in its own time, it was a vastly successful vehicle for the riches it contained—the principal propagating agent of English music between 1652, when John Playford published Henry Lawes’s Select Musicall Aires and Dialogues, and 1721, when the last reissue (a disguised publisher’s remainder, by then decidedly archaic in appearance) of Henry Purcell’s Orpheus Britannicus came on the market.

The lineage of content is as direct as that of format. Orpheus Britannicus, the two-volume posthumous collection of 1698 and 1702 gathered by John Playford’s son Henry, was as much a book of ‘aires and dialogues’ as the Lawes volume of 1652. That had initiated, in place of the songbook of the Jacobean period, with staff notation for the voice and separate tablature for the lute, the concept of treble and bass parts on two linked staves, the bass representing the foundation for the basso continuo—the harmonic support which it was up to the accompanist, working within tolerances determined by convention and the composer (for Lawes, comparatively free but simple; for Purcell much more precise and complex) to improvise upon the ‘Theorbo-Lute or Basse Viol’ (1652), the ‘Theorbo-Lute, Bass-Viol, Harpsichord or Organ’ (1688), or the ‘Organ, Harpsichord or Theorbo-Lute’ (1698). The changing emphasis of the title pages charts the decline of the theorbo, but also shows how late was its dethronement. For the theorbo, the Baroque lute with additional bass strings, was the preferred instrument of vocal accompaniment for the greater part of the songbook period, and was only ousted by the less expressive harpsichord when elaborate continuo parts, easier to realise at a keyboard, became the fashion.

Lawes’s songs, many of them written before the Civil Wars but decked out in their printed dress by Playford during the Protectorate, established the forms that were to be standard for the next forty years; and since the books ensured a measure of permanency, and were eminently practical for domestic use in those households of the ‘middling kind’ which had increased in number and significance as a direct consequence of the Civil Wars and Interregnum, new compositions originally intended for the theatres and the court ended up assimilated to the format that the books presupposed.

In the 1680s and 1690s such books proliferated, generally in the shape of anthologies: ‘Banquets’, ‘Theatres’, or more floridly titled garnerings of song that might run to a number of volumes. With Orpheus Britannicus Henry Playford summed them all up in his collection of the compositions of the man who himself consummated the musical potential of the age. The dialogues and the two ayres here recorded have all been taken either from Purcell’s contributions to the anthologies, or from Playford’s harvest of Purcell in the Orpheus. Three of the dialogues derive from Purcell’s musical embellishment of plays. ‘Why, my Daphne?’ was ‘Sung in a new Play’ (we do not know its title) by John Bowman, the popular bass whose acting career lasted from 1673 until (incredibly) 1739, and Charlotte Butler, famous for her singing, dancing and enunciation. ‘Fair Iris and her swain’ was sung by the same pair in John Dryden’s Amphitryon (1690), the work that initiated the great poet’s immensely productive partnership with Purcell. ‘As Amoret and Thyrsis lay’ is from The Old Batchelour, the ‘first Offence … in any kind of Poetry’ committed by Dryden’s protege, William Congreve.

Three further dialogues are from ‘dramatick operas’, the spoken plays with extensive musical interludes which Purcell and the actor-manager Thomas Betterton developed into an independent form. ‘Tell me why’, the words of which are probably by Betterton, is from the first of their joint ventures, Dioclesion (1690). ‘You say ’tis love’ and ‘For love ev’ry creature’ belong to King Arthur (1691), a triumphant collaboration between Purcell and Dryden, produced by Betterton.

The remaining dialogues all first appeared in the anthologies or the Orpheus, though ‘In all our Cinthia’s shining sphere’ was subsequently used by Daniel Purcell, Henry’s brother, when he cobbled together a dramatic opera with the eccentric poet Elkanah Settle in 1697. They all explore, as do the other songs on this disc, the pleasures, pains and ambivalences of love—topics which the poets of the Restoration found inexhaustible and which they treated with the clarity, scepticism and extravagance that distinguished the age they lived in. It was left to Purcell to invest their words with the richness of true feeling. But two of the poems stand out—Sir George Etherege’s ‘In some kind dream’ and Dryden’s ‘Go tell Amynta’, both of them dating from early 1680s, and both striking an evident and intense response in Purcell.

Of the two ‘Single Songs’ or ayres, ‘What a sad fate is mine’ is written on a ground, a device which always inspired some of Purcell’s most interesting effects. ‘Stript of their green our groves appear’ is a setting of words by Peter Anthony Motteux, who originally published it as the first musical supplement to the first issue of his Gentleman’s Journal (1692). This was the original English literary weekly, and Motteux must be allowed his proper acknowledgement to ‘Mr. Purcell, to whom I must own my self doubly obliged; for he hath not only made the Notes extremely fine, but nicely adapted them to my Words. I am not without hopes of having the Honour to have it sung before Her Majesty’. We do not know if this came about, though Purcell’s ingenuity in the setting of troublesomely irregular words is evident when the first and second stanzas, which share the same bass, are compared. Yet it is not an incompetent poem, and its central image, at once erotic and bleak, passionate and cool, of love as both a fruition and a death, is central to the climate of feeling that these songs embrace.