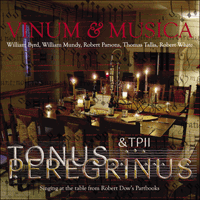 Singing at the table from Robert Dow's Partbooks

Glorious polyphony from William Byrd, Robert White, Thomas Tallis and others, performed in the kind of informal setting—and using only the original partbooks—the composers themselves might have recognized.

À table!
It was in 1581 (in his late twenties) that Robert Dow began to write out all his favourite music into five partbooks—designed for his dinner guests to sing and play from, as they enjoyed his wine and his company. In his near-immaculately copied-out manuscripts Dow chooses to focus right at the beginning of each on two key aspects of life: wine and music—'Vinum et Musica Lætificant Corda' ('Wine and Music Make Hearts Merry/Rejoice'), as he inscribed with emphatic initial capitals at the beginning of each partbook! And so they do.

It’s hard to overstate the unusual and significant aspects of this recording project, both in terms of the repertoire and its provenance, and for Tonus Peregrinus as an ensemble with a line-up essentially unchanged for quarter of a century—we began barely out of our childhood as students and now have an ever-burgeoning complement of our own children. Although an unusual project, Vinum et Musica is completely in keeping with our historical and open-ended search for real artistic authenticity at the same time as simply and greatly enjoying the making of music and good company. Recording this album was made possible only by great generosity, and that generosity fortunately extended to the way we learnt, rehearsed, and recorded this incredible music together—'pastime with good company', as Henry VIII may well have put it.

For a good number of years now we have been meeting with friends in upper rooms in London pubs (and beyond the UK with other ensembles such as Cappella Pratensis in the Low Countries and The Song Company, Australia’s national vocal ensemble) and rediscovering with others the pretty much 'lost art of partbooking'. Thomas Morley recounts an anecdote from the perspective of his fictitious student Philomathes in A Plaine and Easie Introduction to Practicall Musicke (1597): 'But supper being ended, the Musicke bookes, according to the custome being brought to the table: the mistresse of the house presented mee with a part, earnestly requesting mee to sing. But when after manie excuses, I protested unfainedly that I could not: everie one began to wonder. Yea, some whispered to others, demaunding how I was brought up …'

Singing from partbooks is very different from the way singers normally perform today in at least five different ways: unlike modern sheet music, where you can see everything else that’s going on, a partbook just has one part. What’s more, there are no barlines, so even working out where the beat (or tactus) is and keeping in time is, to put it mildly, challenging. The words are written down (in an often hard-to-decipher script) but not always in the right place and sometimes clearly meant to be repeated without indication. Even knowing what page you’re to start on requires some discipline as the complexities of notation (some parts take up more space on the page than others) mean that the same piece is on differently numbered pages across the five partbooks—and the canonic drinking song Hey down down down only appears in the Bassus partbook.

Last but not least, the harmony requires 'modulating' from what is on the page for the twin reasons of 'necessity' and 'beauty'—scholars disagreed then and disagree now, but the differences obtained by such modulation are immense and often very affecting without being necessarily 'correct' or even one of the textbook answers.

But more importantly than these limitations—or quite possibly enablers—is that this is precisely the way famous composers such as William Byrd, and their friends such as Robert Dow, actually experienced their own music. And so, we really should too—in order to understand both their practical approach and their communal music-making experience.

Partbooking is a great leveller—the most formidable musicians and sight-readers extraordinaires find that the ground has been taken away from under them, particularly in terms of rhythmic structure and harmonic orientation. Reading from Renaissance partbooks does require some individual preparation simply to understand the basics in terms of notes and rest values, but it’s impossible to know how the piece works without hearing it with all the parts sung together—so one has to learn it in the company of others, which can be an uncomfortably revealing process!

When people talk about authenticity or 'HIP' ('historically informed performance') they generally mean understanding what the treatises say about ornamentation or using the instruments that were actually used several centuries ago. What they don’t mean is wearing a wig, taking snuff, and undergoing medical treatments of the same era. Well, we weren’t doing any of those things either, but we did take one holistic aspect of this 16th-century English repertoire very seriously indeed—the fact that (at least) these extant partbooks from the period were clearly designed to be used in familial settings, in private residences and it seems, at the table, with the normal things that you might find on a table, i.e. food and drink—and candles, of course.

Our experience since the early 1990s is as an ensemble of friends with careers across the musical spectrum, leading and singing in other ensembles and spearheading music production and publishing as well as extramusical trajectories in the law and beyond. Each of us has followed our own journeys directing other ensembles such as The Swingle Singers, The Amaryllis Consort, and The Song Company, as well as affecting, and in some cases guiding the industry at places as varied as Faber Music, Hyperion Records, and BBC Radio 3. When we have gathered to record in the studio or to perform live, these individual experiences have combined to create our unique sound and style.

For this project we and our families simply lived together for ten days or so, and sang each day around the table, sometimes with most if not all of the next generation (ambitiously called TPII, whether actually singing or absorbing by osmosis). This meant that our musical performance was but one part of our collective experience which included cricket, underwater rugby, Avengers RISK, and a lot of meal-preparing and appreciating, and seriously competitive table tennis … oh, and Body Body and Names in the Hat (if those games mean anything …)

Apart from the opening toast-cum-prayer and a drinking round to get us started (both, perhaps surprisingly to our modern way of life, are contained within these same partbooks), on this album we make our way through a cornucopia of stunning sacred polyphony in Latin, by the top names from late 16th-century England: William Byrd, William Mundy, Robert Parsons, Thomas Tallis, Robert White, and the mysterious 'Mr Tayler'. There is also the sense of performing slightly furtively in a private home (albeit a château), as the contemporaries of Mr Dow (most likely including William Byrd himself) were forced to keep some of their musical activities hidden from the authorities, as Roman Catholics in a time of religious persecution by the State. However, despite any furtiveness, the sense of enjoyment is literally written in to these five manuscript partbooks. In our château in France we journeyed, as much as one can, through space and time to a dinner party in the late 1580s, somewhere between Oxford and London at the home of Robert Dow …

Unlike normal studio recordings of prepared repertoire from modern editions, we weren’t at all sure of the best way to do each piece, in terms of pitch and part configuration, until we tried them out at the table, and we needed to remain flexible in this regard throughout our time at the château. These partbooks were designed to be sung at and around the table, by voices and/or instruments, and presumably therefore with whoever turned up for dinner taking the parts as needed. Our own experience of this is that the relative ranges of the parts change across the repertoire in the Dow Partbooks, and we swapped around to get the best available fit as we went along. Of the twelve tracks on this album, two are basically single 'live' takes, including a 'bootleg' recording of our foray into the local community for Sunday morning Mass, and the rest have been lovingly assembled from our daily sessions at the table. By kind permission of Christ Church, Oxford, and facilitated by DIAMM, facsimiles of Ave Maria by Robert Parsons are included so that you can sing along at home if you so wish.

When you perform in this way you have lots of choices to make and agree upon along the way. For this album we have deliberately let stand some of the more provocative ficta choices and mixing of hexachords, whether they be simply novice errors or sophisticated experiments. It’s certainly easy to believe that Byrd (clearly responsible for some extraordinary harmonic conflagrations elsewhere in his works) would have been interested in some of the conjunctions we stumbled upon, and by Henry Purcell’s time a century later such sonic colours were part of his language. I am always happy to argue over a glass of wine and a partbook … but let’s let Robert Dow have the final say:

Musica capitur omne quod vivit si naturam sequitur.
Everything that lives is captivated by music if it follows nature.