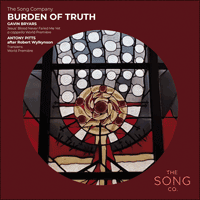 The première recordings of Gavin Bryars’s 32-part choral arrangement of his epochal minimalist work, Jesus’ blood never failed me yet, inspired by the singing of a homeless person on the streets of London, and an extended extrapolation in 25 parts of Robert Wylkynson’s 13-part canon from the Eton Choirbook, Jesus autem transiens, composed by Antony Pitts on a road trip into the heart of Australia. The Song Company and collaborating ensembles recorded this moving programme during lockdown in bedrooms and kitchens across Australia.

‘Bryars’s piece grows from acoustic out-takes of a 1971 documentary on homeless people in London. Celebrating its 50th anniversary, the piece is a bespoke setting, reflecting a lengthy collaboration between ensemble and composer. The 32 voices sing around the loop of a homeless man crooning the title phrase in a voice that is frail, yet rings with the power of conviction. The hummed opening bars swell imperceptibly to entries from different configurations of voices … the piece builds in intensity through various iterations rising to a glistening soprano descant. The lower voices fade as the sopranos, ethereal in their simplicity, accompany the old man on his loop—an unwitting soloist, immortalised and endlessly re-incarnated in this piece. The power of repetition recurs in Transiens (2020), which Antony Pitts has composed from the fragment of Wylkynson’s melody (composed in the early 1500s) … during a road trip in outback Australia. In it, I hear the sounds of the landscape—the flocks of birds, the sunrise over a red horizon, unforgiving mountains and dusty sweeping plains; individual parts make their point through the impossibly rich tapestry … the attainment of purity through music’ (Limelight, Australia)» More
‘[Jesus' blood] captures a purely private moment of spontaneous un-self-conscious music making—untrained yet true—and the setting here against trained singers created a carefully moulded background of subtly shifting balance and a listener experience of still reflectiveness … Transiens subjected the intervals and contour of Wylkynson’s original to bewildering proliferation like a mantra that takes the listener to new levels of awareness and transcendence’ (Sydney Morning Herald)
‘Transiens is a monumental new work, profoundly influenced by Renaissance sacred choral music in general and, of course, by Robert Wylkynson’s canonic treatment of Jesus autem transiens in particular … what an extraordinary achievement for The Song Company, to have completed this project during what is surely one of history’s most difficult periods to be a singer’ (Sydney Arts Guide, Australia)
‘Subtle shifts, solos peaking over the other voices, then fading back to the group … just beautiful’ (Sydney Arts Guide, Australia)
‘Transcendental and deeply moving … a truly astounding experience [Jesus' blood] … so full, rich and complex was this piece [Transiens] that it probably should be considered a major new Australian choral work’ (CityNews, Australia)
‘In the new setting [of Jesus' blood], as the old man’s tremulous tune seemingly endlessly repeats, the a cappella voices accompany, harmonise and embellish the phrases. Gradually voices in counterpoint expand into the space: humming becomes vowels, lengthen into words, become phrases in canon, become riffs on phrases taken up by newer smaller groups which have formed … the old man’s voice continuing as a cantus firmus while the shifting groupings and vocal textures grew and evolved. One felt that the full glory of choral singing was being revealed. As a companion piece to the Bryars work, Antony Pitts’s Transiens is an outstanding accomplishment’ (Classic Melbourne, Australia)» More

Gavin Bryars Jesus' blood never failed me yet (1971)
In 1971 a friend, Alan Power, was making a film about people living rough in London, around Waterloo station and Elephant and Castle. While filming he made a number of tape recordings, some synchronised with the film, others not, and he eventually gave me those tapes that he no longer needed, and which were to be discarded. For some reason, and I still don't know why, I listened to them all. These homeless people talked about their lives and would sometimes break into drunken song. But one man, who didn't drink, sang a short fragment of religious song—Jesus' blood never failed me yet—which I didn't recognise. (I discovered much later that it was almost certainly improvised.)

I was struck by his singing, which was very touching, in tune and musical, and happened to be in tune with my piano. I made a loop from his singing, and wrote a simple accompaniment and arranged this for a small ensemble with a simple, gradually evolving orchestration. Over the years I have made many different versions ranging from just a few players to full orchestra and chorus. The accompaniment, however, does not seek to draw attention to itself but forms a support to the old man's voice, respecting its dignified humanity and simple faith. It remains, in spite of his situation, an understated testimony to his optimistic spirit. Although I have heard this musical fragment many thousands of times through performing the piece over so many years, I am still moved by his singing.

The first recording, produced by Brian Eno in 1975, achieved a kind of cult status in spite of its low-key distribution. A second recording, in 1993, which included a contribution by Tom Waits had a wider success, getting to No 1 in record charts in many parts of the world. The most recent version was recorded live at Café Oto, London, in 2019 by my own ensemble, including my four children.

Now, fifty years since I first heard the old man's voice, I have made a new version for unaccompanied voices for The Song Company, drawing on my long experience of working with the finest choirs in the world. Although it retains the essential simplicity and directness of other versions it actually achieves this by a much greater attention to detail, and involves a more subtle approach, such as fragmentation of the text as well as Graingeresque techniques like humming and whistling.

I first worked with The Song Company in Canberra in 2013 and again in Adelaide in 2015, where they premiered five madrigals specially commissioned for them. Having completed the a cappella Jesus' blood project, I wrote five more madrigals last summer during lockdown to complete my Sixth Book of Madrigals, which I dedicated to them.
Gavin Bryars

Antony Pitts Transiens (2020, after Robert Wylkynson, fl.1500)
The Song Company, as Australia's national vocal ensemble, is able to pursue major projects over a number of years with the same core of virtuosic and versatile performers, drawing on expertise and resources from our musical colleagues around the world. Sometimes that's brand-new music, sometimes it's very old indeed. In the case of Transiens, it's both.

In 2019 we continued a journey exploring original musical manuscript notation with the support of the University of Oxford's Digital Image Archive of Medieval Music, by standing around a central music stand to read from a facsimile of the magnificent Eton Choirbook, compiled in the first few years of the sixteenth century. The final index-page of the Eton Choirbook manuscript has an extra piece added by Robert Wylkynson who was in charge of the choir at Eton from 1500 to 1515. In his canonic setting of the Apostles' Creed for thirteen voices the names of the Apostles are inscribed above successive phrases and the nine-note opening chant 'Jesus autem transiens' (which means 'But Jesus passing through them') passes from one voice to another, as each of the twelve Apostles takes up the story of the Creed. Those nine notes build up a harmonic sequence of three chords, each used three times.

Fast forwards from Eton College half a millennium ago to January 2020 and a road trip from Uluru, at the heart of the Australian continent, to Kakadu and the Darwinian coast, during which I was working on a version of Wylkynson's canon for more-or-less double the vocal forces and lasting more than three times as long. What in Wylkynson's original fits onto half a page of music has expanded in my version, simply called Transiens, to a seventy-page score with 25 staves to a page. However, almost the entirety of Transiens is composed using canonic and other contrapuntal devices that derive all their material from that half-page, and so, in that in sense, it is a non-linear fractal interpretation of the original canon. (The only additional material is a direct quotation of the hymn fragment sung by the old man in Jesus' blood never failed me yet, for which Transiens was written as a companion piece for this recording and live concert performance by The Song Company and partner ensembles.)

Transiens is a triptych—that is, in three Parts or sections, like a mediaeval altarpiece such as the van Eyck brothers' Het Lam Gods—and is scored for 25 voice-parts (six sopranos, six altos, six tenors, six basses, plus a central cantus firmus) with a total duration of almost 25 minutes. In Transiens the thirteen voices of the original canon are joined by another twelve voices, making 25 in total (i.e. 1+24), and taking inspiration from the scene in the Book of Revelation of 24 elders singing a 'new song' around the throne of the Lamb.

The central Part (of the three Parts) is an ethereal arrangement of the original canon, while the outer two Parts focus on the twelve phrases from the Creed (some longer, some shorter) and treat each as a mini-canon by itself, interspersed by echoes of the complete original and new superimpositions and reflections of the underlying nine-note theme.
Antony Pitts