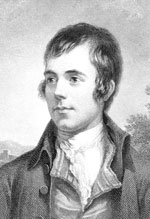 born: 25 January 1759
died: 21 July 1796
country: United Kingdom
Robert Burns was born in Alloway, Ayrshire, on 25 January 1759. His father was a poor tenant farmer – an occupation which Burns also followed but with scant success. He had little formal education but was a voracious reader with an abiding love for Scotland, its tradition of oral poetry, and its music. His greatest work springs from the reactions of a generous and compassionate nature to what he saw around him, and the things he knew about at first hand. Scottish rural life with its love-songs, work-songs and drinking-songs provided him with an inexhaustible field for the expression of his humanity. He had a command of both English and the Scots vernacular, and the richness (and economy) of his writing betokens a mastery of the two languages. He might have emigrated to Jamaica were it not for the success of his first published volume Poems, Chiefly in the Scottish dialect (1786). This enabled him to escape from the consequences of several scandalous affairs in Ayrshire and to build a new life in Edinburgh. In fact he veered between being a literary lion and tenant farmer and was exhausted by the demands of this dual existence. He later married Jean Armour who had previously given birth to his children out of wedlock. He moved to Dumfries and became an exciseman, trained for the post by one James Findlay. Burns died in July 1796 as a result of rheumatic heart disease. He remains the only poet in the world whose birthday occasions national celebration and festivity, not only in Scotland itself but in every enclave of the Scottish diaspora.

Burns is justifiably revered as perhaps the most famous of Scotsmen, but his contribution to music is perhaps less acknowledged. From 1786 he gathered material for James Johnson’s The Scots Musical Museum and later for George Thomson who was in touch with Beethoven and Haydn among many other continental composers. Unlike Beethoven, Burns worked for Thomson without payment, considering such activities to be his duty as a Scotsman. This involved the collection of folksong from oral sources and from all over the country; at the time he probably had a greater knowledge of original Scots melody than any man alive. He composed lyrics to existing tunes as well as changing, adapting and completing fragments of existing verse. He was also responsible for composing and completing melodies, although the extent of this work will probably never be known. Instead of ruining the original sources (as a man less uncannily in tune with the spirit of Scots poetry and music might have done) he preserved and purified material which would otherwise have become corrupt or forgotten. He was almost single-handedly responsible for the preservation of Scots folk culture in lyrics of abiding beauty and memorability.

Byron said ‘The rank of Burns is the very first of his art’. Goethe, alerted to Burns’s work by Thomas Carlyle in 1828, saluted Burns as the ‘first of lyricists’. Like Goethe, Burns regarded his own life and character, his natural impulses, as the very raw material of art. His work shows a seriousness and gravity which counterbalances his tearaway side, as well as an astonishingly modern viewpoint which scorns eighteenth-century niceties of class differentiation and religious propriety. When the church reprimanded him for fornication he was able to reply: ‘The Kirk an’ the State may gang to Hell, but I’ll gang to my Anna’. Goethe’s approbation was quickly followed by translations of Burns’s poetry by various German poets, and Schumann was clearly entranced with the lyrics. It is clear that even in translation Burns’s poems seemed to the composer like the natural and unstilted reactions of a modern man, a real Mensch. (Goethe had felt the same when first encountering Shakespeare.)