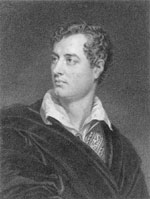 born: 22 January 1788
died: 19 April 1824
country: United Kingdom
George Gordon, Lord Byron, born in London in 1788 (he was an exact contemporary of Rückert), was perhaps the most famous British man of letters of the age after Walter Scott, at least as far as European fame was concerned. He was born with a club foot, but his lameness did not prevent him from enjoying a roving life in which he was famous as an archetypal romantic, a traveller of unusually wide experience (his enthusiasm for the open-hearted nature of the Greeks was to lead to his death), a political radical, and a man of scandalously ambivalent sexuality. His fame as a writer was confirmed in 1812 with Childe Harold’s Pilgrimage which took Europe by storm (as well as captivating the composer Berlioz, some years later). In 1814 his poem The Corsair sold ten thousand copies on the day of its publication. After a disastrous marriage Byron left England in 1816, never to return. He lived in Switzerland with the Shelleys, visited Venice, wrote Manfred (a work for which Schumann would write music in 1848/49), and sold Newstead Abbey, his inherited country seat, which cleared his vast debts.

Byron’s most famous poem is Don Juan which dates from 1818; this is a work which reveals the poet’s humour and wit in contrast to the melancholy of Childe Harold. A liaison with the beautiful Teresa Guiccioli introduced the poet into a new milieu which revitalised him; he became involved in the struggle to free Venice from Austrian rule. His work became re-politicised as a result, but his interest in this cause eventually waned in favour of the struggle of the Greeks for independence from the Turks. He took personal command of a brigade of Greek soldiers but died in Missolonghi of a fever (April, 1824) contracted during his Greek expedition. His posthumous reputation was quickly established: he became one of the most potent symbols of the Romantic movement. He was seen as a man of infinite sympathy and grace, on the side of the disadvantaged and weak, and free of the conventional morality and hypocrisy which were the mark of the typical Englishman in the eyes of Europeans. He was someone who could combine irony and humour (which is modern enough to make us laugh out loud today) with the deepest seriousness. The glamorous reputation his name enjoyed on the continent after his death is impossible to exaggerate.