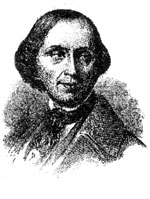 born: 1805
died: 1875
country: Denmark
The enormously prolific Hans Christian Andersen was born in Copenhagen. He remains world-famous for his fairytales but he was author of almost every other genre – the German translation of the Werke appeared in 1847 and runs to fifty volumes – plays, novels, poems. travel books and autobiographies. He was born in poverty and gradually fought his way to recognition, drawing on the pain and rejections of his childhood for much of his work including the fairytales.

Schumann and Andersen met for the first time in Leipzig on 22 June 1844. On this occasion Livia Frege (1818-1891), a soprano much admired by Schumann and Mendelssohn, was also invited. The Op 40 songs were performed, and according to Clara (who was surely the pianist) the poet received them ‘with seeming indifference’. In Andersen’s own mémoires he remembered the evening as being ‘poetic’ with only the composer and himself as audience. Clara’s charming presence, and that of Livia Frege, are not mentioned. (It was rumoured that Andersen had been unhappily in love with Jenny Lind, another friend of the Schumanns, but the poet was also certainly tormented by his homosexuality.) In any case, lieder were small beer and he was openly ambitious. Andersen was more interested in interesting Schumann in a much larger project, and proposed his fairytale Die Glücksblume or Die Blume des Glücks, ‘The Flower of Happiness’, as the basis of an opera. Schumann was taken with the idea and the two men corresponded about it. The idea came to nothing, almost certainly because of the mental crisis which overtook the composer in the autumn of 1844. Schumann was aware of the difficulties of Andersen’s personality: a conversation with the Danish composer Gade in 1846 led him to write in his Tagebuch of the poet’s ‘childish vanity’ (it may have taken him some time to come to agree with Clara’s instant reaction) as well as Andersen’s inability, also like a child, to avoid the open expression of opinions that most people would suppress with good manners. In comparison with Dickens the Schumanns escaped lightly. The English novelist admired Andersen’s work and invited him to stay for a fortnight at Gad’s Hill Place in the summer of 1857. The Dane, a combination of Pecksniff and the Ugly Duckling, as Dickens later remarked, stayed five weeks and was counted by the Dickens children the most unbearable guest the family had ever entertained.