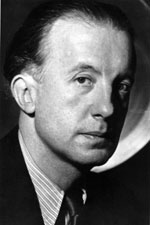 born: 14 December 1895
died: 18 November 1952
country: France
Paul Éluard was the pseudonym of Eugène Émile Paul Grindel (Éluard was in fact the name of his maternal grandmother). He was born into a comfortable middle-class household in Saint-Denis, just outside Paris, on 14 December 1895. Although Éluard was always associated with the Left and with working-class causes, his father was a chartered accountant who became a successful estate agent. Three things jolted the young man out of the comfort-zone of a bourgeois existence: illness, war and love. A sudden and severe pulmonary haemorrhage at the age of seventeen consigned him to months of enforced immobility at a sanatorium of Clavadel, near Davos, where he read deeply and widely; the crystalline Swiss mountain landscapes by which he was surrounded were later to influence his poems. A young Russian student by the name of Helena Dmitrovnie Diakonova was a fellow-patient at the same institution. Her nickname was ‘Gala’; after some years of separation Éluard was to marry her in 1917 when on military leave. Despite his ongoing infirmity he had volunteered for the front; his first published work, Le devoir et l’inquiétude (1917) describes the misery, comradeship and solidarity of the soldiers who suffered in the trenches.

After his demobilization, already a young husband and father, Éluard was introduced to André Breton and Louis Aragon and soon assumed his place as a member of the Parisian avant-garde, publishing several collections of poetry. In 1921 Éluard met the German painter and sculptor Max Ernst (1891–1976), the first of his many painter friends and one of the most influential on his development (there are thirty-two painters celebrated in Éluard’s 1948 anthology Voir, including Ernst). His seminal role in Éluard’s career has been compared to that of Virgil guiding Dante in the perilous regions of the dream-like inferno that was to become Surrealism. The poet chose six of Ernst’s collages to illustrate his collection Répétitions. Éluard, Ernst and Gala settled into a ménage à trois, the German painter having left his wife and son. Their shared home at Eaubonne near Paris was decorated with Ernst’s murals. In 1924 there was a personal and conjugal crisis and Éluard suddenly left Paris for Saigon. Both Ernst and Gala followed him there at his behest; it was decided in Vietnam that Gala would stay with Éluard—although he was eventually to lose her to another painter, Salvador Dali, in 1929. The poet had a lifelong hatred for possessive jealousy, believing rather in the innocence of desire; sexual liberty was a reflection of fraternal sharing and openness of heart. Éluard took the subject of love extremely seriously: the erotic freedom he espoused was never simply an excuse for libertinage, and each of his partners was accorded the elevated role of Muse in a seamless tapestry of creativity. The work of the poet, like that of his close friend Picasso, has often been defined by the major female figures of his life—Gala, Nusch, Jacqueline and Dominique. It is the second of these, Nusch, who was often the inspiration of the poems that Poulenc chose for his settings.

Together with Breton, Philippe Soupault and Aragon, Éluard was the founder of Surrealism, a movement that grew out of Dadaism, although the term had been coined much earlier by Apollinaire. In October 1924, soon after Éluard and Gala returned to France from Saigon, Breton published his Manifeste de Surréalisme. This defines the movement as a ‘purely psychic automatism by which it is proposed to explain, be it verbally, be it in writing or by quite other means, the true functioning of thought. Dictated by thought in the absence of all control by reason, outside all aesthetic or moral occupations, Surrealism rests on the belief in the superior reality of certain forms of associations, formerly neglected, and in the transcendent power of dreams released from any interference by thought. It tends to destroy all other psychic mechanisms and to take their place in the resolution of the principal problems of life.’ It follows that every reading of a surreal poem is wholly individual.

Several important poetry collections were published in this period—from Capitale de la douleur (1926, the year Éluard joined the Communist party) to La vie immédiate (1932). In 1930, the same year that Éluard published his collection À toute épreuve, he had met Maria Benz, a destitute music-hall and circus performer from Alsace, eleven years younger, who went by the name of Nusch. The poet’s discovery and rescue of this highly intuitive waif brings to mind an older version of Mignon, the child-acrobat saved by Wilhelm Meister in Goethe’s novel. The couple married in 1934. Graceful, light-hearted and luminously beautiful (she was one of Picasso’s favourite models), Nusch was the poet’s ideal companion and inspiration. The collection Les yeux fertiles (1936) celebrates Éluard’s friendship with Pablo Picasso; the powerful affinity of poet and painter, both personal and political, was reinforced by the rise of Fascism and the outrage of Guernica.

By 1938 Éluard had broken with Breton whose brand of ‘pure’ Surrealism became anathema to him; instead he preferred to develop his own kind of Promethean humanism, a joyful celebration of the fraternity of mankind where women are the spiritual mediators, a philosophy light years away from the dour and dogmatic Stalinism of some of his associates. Le livre ouvert I (1940) was one of the first collections in which the poet, now taken up by Nusch and themes of love, more or less turned his back on the didactic preoccupations of his former colleagues. The occupation of France and the resistance, far from extinguishing these themes in the poet’s works, reinforced his visionary optimism and determination (Poésie et vérité 1942—a title that translated Goethe’s Dichtung und Wahrheit as a dig at the occupying forces—and Rendez-vous allemand, 1944). In these two collections the radiant poem Liberté proclaims the ‘power of a word’ by which the poet can begin his life afresh: ‘I was born to know you / To name you / Liberty.’

Éluard had always been fragile in terms of his health. He often left Paris for sojourns in the mountains and by the sea, holidays that were facilitated by the family money that enabled him to survive in relative comfort. Nevertheless it was Nusch who died first—of a totally unexpected cerebral haemorrhage in November 1946 while visiting the poet’s mother. This sudden loss rendered Éluard suicidal. He was consoled by the affections of Jacqueline Trutat who inspired a different kind of poetry in Éluard, as did Dominique Laure who became his tender and vigilant wife in 1951. The poet died of a sudden heart attack on 18 November 1952.