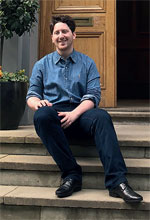 born: ?
country: Australia
Ron has loved music all his life but first picked up a guitar at the age of 12. By 16 he had received a scholarship to learn music composition at the prestigious Victoria College of the Arts in Melbourne, Australia. An intense and impassioned devotee of classic rock, blues and jazz, his childhood dream was to one day visit Abbey Road Studios.

In late 2016, he joined the ALAN team as composer, while a medical student at the University of Melbourne, Australia. Ron has composed five original ALAN songs, which have inspired the orchestration of the entire Act 5 of the Fantasy ('Evil Professor' and 'Boy Scientist'), as well as track 6 ('Life on the Shelf'), track 9 ('Off to College') of Act 2 and track 10 ('Timeless') of Act 3. Ron completed his medical internship barely 3 months after the recording of the Fantasy, and is currently a postdoctoral researcher in Neuroscience at Stanford University, California.