born: 3 January 1943
country: Austria
Composer, conductor and chansonnier, HK Gruber was born in Vienna in 1943 and sang with the Vienna Boys’ Choir as a child, going on to study at the Vienna Hochschule für Musik. In 1961 he began playing double bass with Ensemble 'die reihe' and from 1969 to 1998 in the ORF Radio-Symphonieorchester Wien. Gruber first began performing as a singer/actor with the ‘MOB art & tone ART’ ensemble which he co-founded in 1968 with fellow Viennese composers Kurt Schwertsik and Otto Zykan.

Composing in his own highly individual style, his music is performed internationally by the world’s leading artists and orchestras such as the Vienna Philharmonic, New York Philharmonic, Berlin Philharmonic, and at Lucerne Festival, Carnegie Hall and the BBC Proms. Gruber is particularly noted for his concertos, including the percussion concertos Rough Music and into the open …; Aerial, for trumpeter Håkan Hardenberger, which has received over 60 performances; a piano concerto for Emanuel Ax; and his cello concerto, written for Yo-Yo Ma and premiered at Tanglewood in 1989. He has composed several operas, most recently Geschichten aus dem Wiener Wald (Tales from the Vienna Woods) premiered at the Bregenz Festival in 2014.

In 2002, Gruber was awarded Austria’s most prestigious cultural prize, the Großer Österreichischer Staatspreis (Grand Austrian State Prize), and in 2009 was announced as an Honorary Member of the Wiener Konzerthaus, following a great tradition of musicians also to receive this accolade, including Igor Stravinsky, Pierre Boulez, Leonard Bernstein and Claudio Abbado. Gruber is an Honorary Lifetime Trustee of the Kurt Weill Foundation for Music. 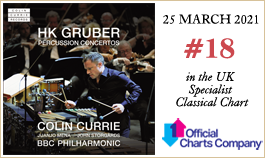