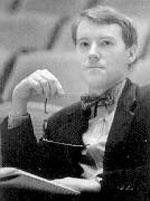 born: 1964
country: United Kingdom
Ivan Moody studied music and theology at the universities of London and Joensuu and took his PhD at York. A composition pupil of Brian Dennis, Sir John Tavener and William Brooks, he has seen his music performed and broadcast all over the world and recorded on such labels such as Challenge, ECM, Hyperion, Sony, Telarc and Warner Classics. Moody has had works commissioned and performed by many of the world’s outstanding artists, including the BBC Singers, Cappella Romana, Chanticleer, Coro Nacional de España, English Chamber Choir, Estonian Philharmonic Chamber Choir, Goeyvaerts Trio, Hilliard Ensemble, Norwegian Soloists’ Choir, Singer Pur, Tallis Scholars and Trio Mediaeval, and the soloists Paul Barnes, Suzie LeBlanc and Raphael Wallfisch.

As a conductor, Moody works regularly with professional choirs and ensembles in both Europe and America, especially in contemporary and Orthodox church music. He is also active as a musicologist, and is a researcher at CESEM in the Universidade Nova, Lisbon.