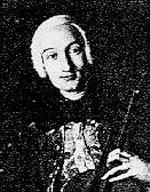 born: 19 February 1743
died: 28 May 1805
country: Italy
Luigi Boccherini was born in Lucca, Italy, into a talented artistic family: his father played the cello and the double bass, his brother was a poet and dancer who wrote libretti for Salieri and Haydn, and his sister was a distinguished ballet dancer. He made his public debut as a cellist at the age of only thirteen, and studied composition first with his father, afterwards with the Lucca maestro di cappella Francesco Vanucci, and finally with Costanzi in Rome. When he was fourteen, the first of a series of moves to highly influential European musical capitals began: he and his father were summoned to the imperial capital, Vienna. Here they continued to impress with their concert performances in the court theatre. For the next seven years Boccherini travelled between Vienna and his home town, composing and performing. He also took periods of leave to visit Milan where he is said, in 1765, to have arranged the first public string quartet performances. In 1766 he went on a European tour, ending up in Paris where he came under the patronage of the influential Baron Bagge: a succession of publications of Boccherini’s works followed, including six string quartets, a set of trios, music for violin and piano and further chamber music.

Next stop, possibly at the suggestion of the Spanish ambassador, was Madrid, where he was much admired and eventually appointed to serve under the Infante as composer and performer. He married a Spanish wife, and during the next fifteen years composed many of his string quintets—a musical form decreed by the court establishment. He also made contacts with nobility from Prussia and Portugal, and met the English author and traveller William Beckford. For support he relied heavily on patronage and, in his latter years, on a pension negotiated with his Spanish employer. His location for part, at least, of those latter years is the subject of some mystery: some scholars have suggested that he remained in Spain, whilst others have assumed that he worked in Germany. What is clear is that, in the late 1790s, and now certainly back in Spain, and despite the popularity of his music (especially in Paris and, to a lesser extent, in London), Boccherini fell into poverty: distressed by the deaths of his two daughters and his second wife in 1804, he died the following year.

Boccherini’s compositional output is substantial and, dictated by the circumstances of his life, largely instrumental. Over one hundred and twenty string quintets survive, as do one hundred quartets and nearly fifty trios, more than two dozen symphonies and eleven cello concertos. His vocal music is sparse, comprising just one Mass setting (now lost), two oratorios, a handful of single Mass movements, a few motets, one opera and three cantatas.