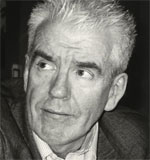 born: 28 April 1952
country: Ireland
'The world now has something rare: a new genuinely comic opera and maybe the most inventive Oscar Wilde opera since Richard Strauss' Salome more than a century ago.' (The Los Angeles Times on The Importance of Being Earnest, 2012)

Gerald Barry was born in Clarehill, Clarecastle, County Clare, Ireland, in 1952, and studied with Stockhausen and Kagel. His early music from 1979 included '______' for ensemble, of which Kagel wrote: 'Gerald Barry is always sober, but might as well always be drunk. His piece '______' is, on the contrary, not rectilineal, but '~~~~~~'. Also from 1979 is Ø for two pianos in which both pianos play identical music simultaneously.

Barry has received a number of commissions from the BBC including Chevaux-de-frise, for the 1988 Proms, The Conquest of Ireland (1996), Day (2005/14) for the BBC Symphony Orchestra, The Eternal Recurrence (2000), a setting of Nietzsche for voice and orchestra, and Hard D (1995) for the Orkest de Volharding. His orchestral work, No other people, was presented at the 2013 Proms with the BBC Scottish Symphony Orchestra and Ilan Volkov. Canada (2017), a short work for voice and orchestra, was commissioned by BBC Radio 3 and premiered by the CBSO, tenor Allan Clayton under Mirga Gražinyt-Tyla at the BBC Proms 2017.

Barry's piano concerto (2012), written for Nicolas Hodges and co-commissioned by Musica Viva and City of Birmingham Symphony Orchestra, was premiered in Munich in 2013 under Peter Rundel with subsequent performances by the CBSO under Thomas Adès.

His first opera The Intelligence Park, released as a recording on NMC, was commissioned by the ICA and first performed at the 1990 Almeida Festival. A new production opened at Covent Garden in September 2019. A second opera, The Triumph of Beauty and Deceit (1991), written for Channel 4 Television, opened the 2002 Aldeburgh Festival, followed by performances in London and the Berliner Festwochen conducted by Thomas Adès. A new staging took place in 2013 at the Badisches Staatstheater Karlsruhe.

The Bitter Tears of Petra von Kant (2001/4) was staged at English National Opera in 2005 and at Theater Basel in 2008 directed by Richard Jones. A recording has been released on the discovery label. La Plus Forte (2007), a one-act opera, was commissioned by Radio France for the 2007 Festival Présences. It was premiered by Barbara Hannigan in Paris. Barry created an English version of the work for the Royal Concertgebouw Orchestra and Thomas Adès.

Barry’s fifth opera, The Importance of Being Earnest (2009/10), was jointly commissioned by the LA Philharmonic and the Barbican in London and received its world premiere staging at Opéra national de Lorraine, Nancy in 2013. The opera has received a number of new productions notably including at the Royal Opera House, Covent Garden in 2013 (since revived in London and given a US premiere at Lincoln Center with the New York Philharmonic and Ilan Volkov) and by Northern Ireland Opera. Earnest received a 2013 RPS Award for Large-Scale Composition and the recording, released on NMC, was nominated for a 2016 Grammy Award. A new production by the Nouvel Opéra Fribourg opened in Fribourg and Paris in May 2019. Most recent among his operas is Alice’s Adventures Under Ground (2014/15), premiered in concert in November 2016 with Thomas Adès conducting the LA Phil New Music Group and Barbara Hannigan in the title role. The world premiere staging was given at Covent Garden in February 2020 in a production by Antony McDonald.