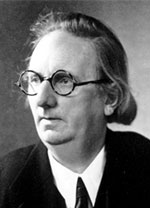 born: 28 July 1893
died: 10 July 1952
country: Denmark
Born in Copenhagen, Rued Langgaard (1893–1952) was a complex figure, his career path resistant to logic or easy summary. Both parents were pianists, his father also a composer and Royal Chamber musician. In 1901 Langgaard began to play the organ and compose short piano pieces. At the age of ten, he began formal studies on the organ and the violin. He made his first public appearances as an organist the following year. Aged twelve, he began to study music theory and by the end of 1906 his music appeared in print—two pieces for piano, and two songs, published by Wilhelm Hansen. He was taught counterpoint by Carl Nielsen for about a month, but later unwisely courted controversy by questioning his almost exclusive dominance in Danish cultural life. At the age of eighteen, Langgaard served as assistant organist at the Frederikskirken, Copenhagen. A year later he enjoyed what would prove to be his only major success with his first symphony, premiered by the Berlin Philharmonic. Biographer Bendt Viinholt Nielsen describes this as ‘the climax of his whole career’. A bitter feeling of injustice at the neglect of his music led Langgaard to become isolated, anti-establishment and, arguably, his own worst enemy. The course of his unpredictable musical career comprises four phases: late Romantic (1906–16); late Romantic but combined with modernist elements (1916–24); re-establishment of his Romantic idiom, but with a deliberate anonymity (1925–45); absurdism, fragmentation, desperation (1944–52). This summary inadequately conveys Langgaard’s range, which also includes works of skilful pastiche.

In his late forties he was accepted for his first permanent job, as organist of Ribe Cathedral. Upon his death thirteen years later, having composed more than four hundred works, he remained unrecognized, frozen out of the Danish cultural consciousness. An idealist with an unmistakable visionary quality—both parents were deeply religious—he composed sixteen symphonies, seven string quartets, four violin sonatas, one opera and many choral works. A wave of interest in Langgaard’s music began in the late 1960s, but has never been sustained in the concert hall, whereas the indispensable medium of recordings has exposed a substantial number of his compositions.