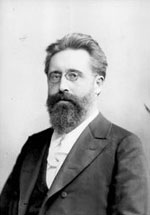 born: 16 February 1847
died: 16 July 1917
country: Germany
Ludwig Philipp Scharwenka, elder brother of the legendary virtuoso pianist Xaver, was born in 1847 in the Grand Duchy of Posen, at that time a province of Prussia but now known as Poznań, Poland. In 1865 Scharwenka moved to Berlin to study theory at the Academy, before becoming one of its professors three years later. Having founded Berlin’s Scharwenka Conservatory in 1881, his brother appointed Philipp as director of theory and composition, and, ten years later, as director of the sister-conservatory in New York. Back in Berlin, Philipp, now principal, oversaw a merger with the Karl Klindworth Piano School, resulting in the Klindworth-Scharwenka Academy. Among Philipp’s students at this prestigious institution were Otto Klemperer, Oskar Fried and José Vianna da Motta. Though his brother achieved more celebrity (as a virtuoso pianist), Philipp Scharwenka was nevertheless recognized as a major composer during his lifetime. He wrote two symphonies, an opera, choral and piano works, and a considerable quantity of chamber music. Some of his works in the last category, with their anticipation of so-called Impressionist music, may be heard occasionally.