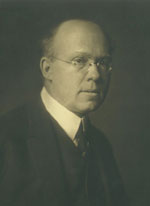 born: 19 December 1882
died: 19 March 1954
country: Germany
Walter Braunfels (1882–1954) was born in Frankfurt am Main and, like Pfitzner, he studied the piano with James Kwast at the city’s Hoch Conservatory. He then continued his studies in Vienna (piano with Leschetizky) and Munich (composition with Felix Mottl and Ludwig Thuille). Braunfels was a fine pianist and played the solo part in the first performance of his early Piano Concerto, Op 21, in 1911. He also wrote a number of works for solo piano, among them a group of 14 Preludes, composed in 1921. His greatest success came in the theatre, above all with the opera Die Vögel, first performed in Munich in 1920, conducted by Bruno Walter who recalled it in his autobiography as ‘one of the most interesting novelties of my time working in Munich’. Walter subsequently conducted Braunfels’s Te Deum in both Munich and Vienna, and his variations on a theme of Berlioz in Berlin, Leipzig and New York. He remained in contact with Braunfels after both had been dismissed by the Nazis (though a Catholic, Braunfels was ‘half-Jewish’), meeting him on several occasions at the home of the Swiss patron of the arts, Werner Reinhart, in Winterthur where Walter heard Braunfels play through his opera Verkündigung (based on Paul Claudel’s play L’annonce faite à Marie).