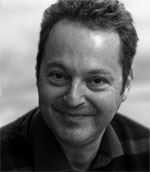 born: 1969
country: United Kingdom
With many world premieres, scores of performances and multiple recordings of his music, British-French-Israeli composer Nimrod Borenstein is much in demand. Leading artists and orchestras who champion his work include Vladimir Ashkenazy, the Philharmonia Orchestra, Roberto Prosseda, Dmitry Sitkovetsky, the Oxford Philharmonic and many others.

The son of a renowned artist, Nimrod’s first musical experience came as a child on holiday in France, when on a family walk through a forest they came across an outdoors concert. 'I just stopped and refused to move until the concert was finished two hours later. And I told my parents then and there that I wanted to learn violin and be a musician.' recalls Borenstein. A love affair with music started, with the young Borenstein challenging himself by listening to classical works on the radio, then turning the sound down halfway through and himself scoring the way he felt the next 30 seconds would continue (he was often more or less correct)! Aged eight he developed a twelve-tone system. 'I was very pleased with myself, until someone told me that someone called Schoenberg had got there first', laughs Borenstein.

In 1984 he won the competition of the Cziffra Foundation and became one of its Laureats. He moved to London in 1986, to pursue his studies as a violinist with Itzhak Rashkovsky at the Royal College of Music. He was then awarded the highest scholarship from the Leverhulme Trust to study composition at the Royal Academy of Music (where he is now an Associate).

Every composer needs artists to perform their music. One of the most important for Borenstein has been Vladimir Ashkenazy, who took an interest early on. A first opportunity to work together arose when Ashkenazy conducted the Philharmonia Orchestra for a performance of The Big Bang and Creation of the Universe to great acclaim. This was quickly followed by a Philharmonia premiere, again with Ashkenazy, If you will it, it is no dream. The collaboration has continued, culminating in 2017 with the release on the Chandos label of a major album conducted by Ashkenazy, entirely devoted to Borenstein’s music.

Borenstein’s music continues to rise in popularity, with his Suspended, Op 69, in particular proving a huge international success with more than 100 performances (from the Edinburgh International Festival to the Taipei Arts Festival) since its premiere in January 2015 at the Royal Opera House, Covent Garden. The music was commissioned especially by Sean Gandini and Gandini Juggling for their ballet for jugglers and dancers 4 x 4 Ephemeral Architectures. The piece continues to tour the world.