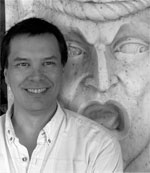 A winner of the Aaron Copland Award, Mr Gordon has twice served as composer-in-residence at the Aaron Copland House. He has received awards from numerous foundations including the American Composers Forum, the MacArthur Foundation, the Barlow Endowment, Concert Artists Guild, the Cheswatyr Foundation and Arts Council England. He has been in residence at La Napoule Arts Foundation in Cannes, and at the historic Cliff Dweller Club in Chicago. Nominated for the Chamber Music Society of Lincoln Center’s Elise Stoeger Prize, and recognized by the Academy of Arts and Letters, he has received academic fellowship support from Boston University, New York University and the Guildhall in London, and was shortlisted for the 2016 Mario Merz Prize for music composition. His works are performed by some of the best ensembles in the world, including The Philharmonia, Munich Philharmonic, Copenhagen Philharmonic, Minnesota Orchestra, Malmö Symfoniorkester, Britten Sinfonia, Cleveland Orchestra, English Symphony Orchestra, Milwaukee Symphony, Buffalo Philharmonic, the Boston Modern Orchestra Project, JACK Quartet, Zeitfluss, Ensemble Meitar, San Francisco Contemporary Music Players and the International Contemporary Ensemble.

He received the 2015 commission award from the American Music Project with a major new chamber work for clarinet and string quartet (the JACK Quartet and Anthony McGill, principal clarinet of New York Philharmonic) which premiered in New York City and Chicago. In December 2015, cellist Toke Møldrup premiered Gordon’s cello sonata, Fathoms, after Shakespeare’s Tempest, at Carnegie Hall in New York. His chamber vocal work Winterleben setting of texts by German poet Friedrich Rückert for horn, mezzo-soprano and piano was commissioned for Los Angeles Philharmonic Orchestra’s principal horn, Andrew Bain, and premiered in August 2015 in Los Angeles as part of the 47th International Horn Symposium. Gordon’s Rocks involved a commission consortium of more than 20 university wind orchestras in US and UK. His song cycle for the baritone Tobias Greenhalgh (Peter Quince at the Clavier) and earlier song cycle Sonnets from Neruda premiere at the Arnold Schoenberg Center, Vienna, March 2018. His choral work, Crucifixus, for double choir and solo cello, written for the Mogens Dahl Chamber Choir, premiered in Copenhagen in April 2017, and was broadcast worldwide by Danish Radio. Gordon has served as an advocate on behalf of ASCAP in support of digital rights in Washington, and worked extensively in classical radio broadcasting. He currently divides his time between the United States and the United Kingdom.