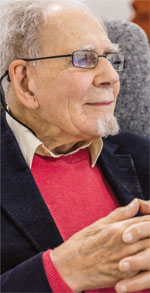 born: 29 April 1919
country: United Kingdom
Stephen Wilkinson was born into a clerical family in Cambridgeshire in 1919. He was a choirboy at Christ Church, Oxford, under W H Harris and Organ Scholar at Queens’ College, Cambridge. He served in the Navy through the war, then became Director of the Hertfordshire Rural Music School from 1947. He was on the music staff of the BBC in Leeds from 1953, later in Manchester. He was conductor of the BBC Northern Singers until 1993, when they became the Britten Singers. Their appearances at the major festivals such as Aldeburgh, Edinburgh and the Proms won them altogether exceptional critical acclaim.

They sang widely around Europe, in Turkey, Thailand, Hong Kong and Australia and made a number of records, some selected as Critics’ Choice in Gramophone. Several works were written for them, and they gave numerous first performances by composers including Walton, Holst, Elizabeth Maconchy, Nicholas Maw, Lennox Berkeley, John McCabe, Wilfrid Mellers and John Joubert.

He also worked with the Nederlands Kamerkoor, the BBC Singers, the RTE singers in Dublin and choirs in Iceland and New England.

Always active in amateur music making, especially for the Earnest Read Music Association, Benslow Music Trust and Canford Summer School, Stephen was awarded the MBE in 1992 and an honorary degree by Manchester University.

He was founder conductor of the William Byrd Singers of Manchester and their companion young string ensemble Capriccio, which has helped many gifted players to launch their careers. In 2009, at 90, he gave up conducting them to devote his energies to composition.

Forsyths of Manchester publish two volumes of solo songs, The sunlight on the garden and Eternal summer. The Other Carol Book for choir and Grass Roots, his choral arrangements of folk songs, are available from Banks of York. Two short pieces commissioned by Manchester Chamber Choir were extended by a poem by Berthold Brecht to make a single movement, The singing will never be done. He has since set three Faroese poems for Torshavn Chamber Choir and five texts from The Tempest entitled And sometimes voices.

Several of his works have been given on BBC Radio 3. Dover Beach, a CD of his choral music, was released in 2012. The Flemish Radio Choir gave the title work its first continental performance and have since toured it around Europe and the UK. Belgian radio broadcast it in 2014. The BBC Singers have recently broadcast Betjeman’s Bells under Bart Van Reyn. Further performance awaits Some Psalms, Three Elegies, That time of year and other works.