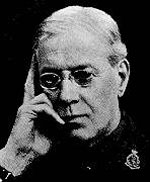 born: 3 July 1860
died: 16 December 1940
country: Scotland
William Wallace, MD, MCh, Captain RAMC, was a classical scholar, a doctor and eye surgeon, a poet and dramatist, a painter, a writer on music and musicians, and a composer. He was efficient—he became inspector of ophthalmic units in Eastern Command in the Great War; observant—he used his skills as a painter to make careful depictions of eye disorders; scholarly—he published a paper on sixteenth- and seventeenth-century Greek ligatures; polemical—his books on music are splendidly provocative; and selfless—in the last two-and-a-half years of his war service he was not off duty for a single day.

William Wallace was born in 1860 and, like Hamish MacCunn (see Hyperion CDA66815), was a son of Greenock. His father, James Wallace, was a distinguished surgeon who may have had to examine his own son when the latter graduated MB and MCh in 1885 at Glasgow University. William went on to study ophthalmology at Glasgow in 1888, about which time he published words and music of a Carmen Glasguense in honour of the university, the bold cover design of a student with mortar-board, books and symbolic Hebrew letter Shin being his own.

But for Wallace the ear was to prove stronger than the eye and he finally settled on music, studying at the Royal Academy of Music, though only for two terms, and thereafter teaching himself. He was one of the six rebels, including his younger contemporary Bantock (also the son of a Scottish-based surgeon), who challenged the conservatism of the music schools of the time. With Bantock Wallace published The New Quarterly Musical Review, frequently editing it with Anderton when Bantock was away. In a letter of 1904 Wallace asks that the Royal College of Music jury give ‘a chance to even the most bizarre and so-called eccentric compositions that are sent in’; with respect to controversies at the Leeds Festival he intends to ‘march in the direction of the guns’! In 1964 Neville Cardus described Wallace as ‘a composer who was one of the first in the progressive movement of seventy years ago’, and some years later, praising The Passing of Beatrice and Villon, recalled Wallace’s Freebooter Songs, ‘one of which, called “Son of Mine”, I sang myself on smoky Saturday nights for a guinea a time’. It is a pleasing thought that such a progressive composer as Wallace was capable of writing words and music (not to mention designing the cover) for songs which were to achieve such popularity.

The Wallace household must have been a fascinating one, for he married the distinguished Scottish sculptress Ottilie Helen MacLaren, daughter of Lord MacLaren. Wallace dedicated his A Suite in the Olden Style for piano to her. She was a pupil of Rodin and exhibited regularly at the Royal Academy, though in 1928 she was unable to enter so William promptly produced a painting, ‘Waterloo Drum’, of a corner of their own house in London and submitted it to ensure the family was represented. It was accepted and duly hung on the line.

The 1914–1918 war saw Wallace working more or less continuously in the Royal Army Medical Corp, from which he retired in 1919 with the rank of captain. By the end of the war he was fifty-eight years of age, had taken only three weeks of leave and had reported on 19,000 cases over four years, many of which he had personally attended. He must have been completely drained. In his later years he became professor of harmony and composition at the Royal Academy of Music (and professorial chief of the library) when his fellow Scot and composer John Blackwood McEwen was Principal.

Wallace’s major works include the fine Creation Symphony (first performed at one of Bantock’s New Brighton concerts in 1899 and recorded on Hyperion CDA66987), the lovely Pelléas et Mélisande Suite of 1903, and a bitingly satirical choral ballad, The Massacre of the Macphersons, which makes a ridiculous combination of snippets from Wagner’s Ring and traditional Scottish themes. There are two further symphonic poems and a number of other pieces, all worthy of attention. Wallace is much more radical than Mackenzie or MacCunn, particularly in his freer development of structure. He also published several books on music theory and history. These include wide-ranging and challenging works analyzing the nature and development of the musical faculty in humankind; and studies of great insight into Wagner and Liszt, whose influence on his own music is clear. He died in 1940.