born: c1520
died: ?1580
country: Spain
Ribera was very much a man of Spain’s south-east. He was born in Játiva (Valencia) probably in 1520. His father, Pedro, was then maestro de capilla of the collegiate church there. Soon the family moved to Orihuela (Alicante), thence later to Murcia: Pedro was certainly maestro at the cathedral in 1535. Bernardino must have received his training there. His first known major appointment was to the cathedral at Ávila where he succeeded the maestro Espinar (died 1558). He took up the post in June 1559. There he was the mentor not only of the young Tomás Luis de Victoria but also of Sebastián de Vivanco. Ribera left the Ávila post at the end of 1562 and became maestro de capilla at Toledo early in 1563. He stayed until 1570, succeeded by Andrés Torrentes. It has been assumed in modern dictionaries that Ribera had died, but recent research has shown that he in fact returned to his roots and became maestro at Murcia Cathedral from 1572 until 1580.

What are we to make of Ribera’s works, of his position in the hierarchy of Hispanic composers, and of his possible influence on Victoria? There is not enough of his music, nor enough variety in it, to award Ribera a place among the great masters, Morales, Guerrero and Victoria. His style seems influenced by Morales and by the mid-century musicians from the Low Countries brought in by Charles V and Philip II for their Capilla Flamenca. Ribera’s general manner is reminiscent of Gombert and his generation. It is very linear, very horizontal. Luxuriant tendrils of vocal lines take precedence over vertical harmonic (dare one say Palestrinian?) balance. But there are passages with clear melodic triads in the approaches to final cadences. Ribera is a link between the era of the Josquin emulators and that of Guerrero, Spain’s most popular composer in the late 1500s. He must have had some influence upon the teenage Victoria, but it is difficult to detect in Victoria’s very Roman style. 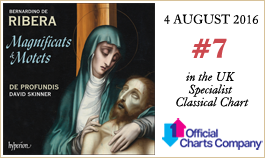