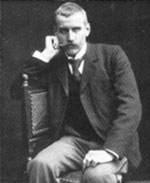 born: 7 February 1871
died: 20 November 1927
country: Sweden
Stockholm-born Wilhelm Stenhammar was the most outstanding musical personality in Sweden of his time. As a pianist he brought high quality music-making to audiences throughout the country through several hundred solo recitals and chamber music concerts; as music director of the Gothenburg Symphony Orchestra he created Sweden’s first truly professional ensemble, persistently championing contemporary Scandinavian composers and introducing his audiences to numerous new works; and as a composer (like Elgar, largely self-taught) he created some of the most important and carefully crafted music ever to come out of Sweden, ranging from symphonic works and operas to chamber music and lieder. Yet there is something deeply enigmatic about Stenhammar’s character. For most of his life he was torn between awareness of his extraordinary artistic talent (and the expectations that came with it) and an extremely destructive self-criticism. This inner struggle manifests itself particularly strongly in his ambiguous relationship with his own instrument, the piano.

The start of Stenhammar’s career was in many ways that of an archetypal Romantic pianist–composer: already as a child he had composed numerous pieces for piano, including three sonatas, the first dating from 1880. His first success as a performer came soon after his first serious piano studies, commencing in 1887 with the former Clara Schumann pupil Richard Andersson. But it was in the early 1890s that he became established as a force to be reckoned with: he appeared as soloist in the first Swedish performance of Brahms’s D minor Piano Concerto and, more importantly, gave the premiere in 1894 of his own Piano Concerto No 1 in B flat minor Op 1. The latter occasion was so successful that it registered far beyond the borders of Sweden and led to Stenhammar performing the Concerto over the following decade with conductors such as Richard Strauss (the Berlin Philharmonic Orchestra) and Hans Richter (the Hallé Orchestra). Curiously however, in recitals Stenhammar hardly ever performed his own solo works, focusing instead mainly on the Viennese classics, and by the early 1900s Stenhammar the composer gradually turned his interest away from the piano in favour of the string quartet, the human voice and the orchestra.

There is little evidence as to why Stenhammar the composer abandoned his own instrument (with the exception of the exquisite piano parts for his lieder) after 1907, but certainly a few intensive years of counterpoint studies begun around the same time gave him new means of expression, well suited to writing for orchestra and string quartet. By the early 1920s Stenhammar’s physical as well as mental health had started to deteriorate, and although he carried on touring as a performer he had lost the energy to compose.

from notes by Martin SturfÃ¤lt ©