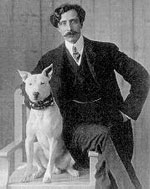 born: 26 July 1876
died: 8 December 1939
country: USA
When Ernest Schelling was born, the Romantic Age in music was drawing to a close. Wagner, Liszt, Tchaikovsky and Brahms were still alive. Schelling was an extraordinary musical prodigy who made his debut as a pianist at the Philadelphia Academy of Music when he was four years old. He was born of an English mother, Rose White Wilkes of Cambridge, and Felix Emmanuel Schelling, a physician and philosopher of Swiss origin and also the boy’s first teacher.

At the age of seven Ernest was admitted to the Paris Conservatoire as its youngest ever pupil; he studied with Mathias (a pupil of Chopin) and many of Europe’s leading performers and pedagogues, including Philipp, Leschetizky, Huber and Moszkowski, giving concerts throughout Europe—from Paris to St Petersburg—all before he was sixteen. Due to this intensive schedule he developed neuritis and despaired of the future. Fortuitously he was heard by Paderewski who was so impressed that he took Schelling as his only American pupil from 1898 to 1902.

Schelling established himself by 1905 as a mature virtuoso and enjoyed a fine reputation as a pianist. He also developed his conducting skills as Music Director of the Baltimore Symphony Orchestra and as conductor of the Young Peoples’ Concerts for the New York Philharmonic. These Young Peoples’ Concerts embodied Schelling’s commitment to bringing the enjoyment of music to children all over the world. He pioneeringly illustrated the concerts with large-format glass lantern slides projected onto a screen, achieving a kind of Pied Piper status. A commemorative bust now stands in Carnegie Hall, placed in gratitude for this work with the young.

When Ernest Schelling died suddenly in December 1939 more than a thousand mourners attended his funeral including a host of colleagues such as Yehudi Menuhin, John Barbirolli, Mrs Fritz Kreisler and Mrs Edward MacDowell; he was to have been conducting that very day. A telegram from Paderewski was read to the Carnegie Hall children’s audience:

Words cannot describe my deep sorrow in losing my dearest friend. He was taken from our love at a climax of his splendid career, leaving unfinished many of his works, depriving us untimely of admiring his rich talent. In the history of American music the name of Ernest Schelling will be given the outstanding place it certainly deserves.