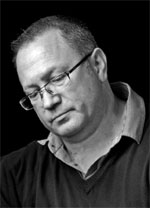 born: ?
country: United Kingdom
Mike has run two careers in parallel: first as a working musician—professional trombonist, composer & arranger covering a wide spectrum of music—and secondly as a music publisher and producer. Whilst studying classical music at university, where he majored in composition and orchestration, he also played professionally as a freelance musician. This diversity of styles continued as he created and produced music as wide-ranging as orchestral film scores, pop, jazz and contemporary opera.

The other side of his career has been in music publishing. In 1991 he was appointed Managing Editor to a major European publisher, working with composers such as Michael Nyman, Phillip Glass, Geoffrey Burgon and Craig Armstrong in the creation of new music.

In 1998 he set up his own music publishing and production company, and went on to create hundreds of commercial recordings, film scores, TV and advertising soundtracks and became a published author.