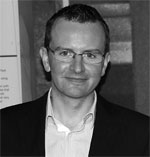 17 Days is a 35-minute work for choir, brass ensemble, piano and percussion that was commissioned and premiered by Crouch End Festival Chorus and conductor David Temple, and was inspired by the Chilean mining accident of 2010. First performed at the Barbican, London, in February 2012 (and again in 2013), the piece received a standing ovation and has since been heard around the world, including at Sage, Gateshead (by Hertfordshire Chorus), and the Michael Fowler Centre in Wellington, New Zealand (by the Orpheus Choir of Wellington). Codebreaker was commissioned and premiered by Hertfordshire Chorus and David Temple at the Barbican in London in April 2014. It received its second performance, also at the Barbican, in May 2015, and in April 2017 received its US premiere performances in Nashville, Tennessee, by the combined choirs of Nashville in Harmony, One Voice Chorus, and the Intersection Ensemble, conducted by Kelly Corcoran.

Malala is a dramatic work for choir, girls’ choir, tenor soloist and orchestra, commissioned by Crouch End Festival Chorus, with a text by Karachi-based novelist and journalist Bina Shah and was given its world premiere at the Barbican, London, in October 2014.