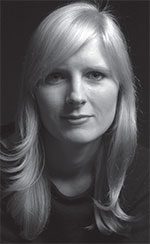 born: 1977
country: United Kingdom
Deborah Pritchard has been broadcast by BBC Radio 3, BBC Radio 4, released commercially by NMC, Signum and Nimbus and performed by the London Symphony Orchestra, BBC National Orchestra of Wales, London Sinfonietta, Royal Northern Sinfonia, Philharmonia Orchestra, English String Orchestra, Orchestra of the Swan, The Hermes Experiment, Chroma, Allegri String Quartet, BBC Singers and the Christ Church Cathedral Choir. She studied composition with Simon Bainbridge for her MMus Degree at the Royal Academy of Music, subsequently holding the post of Junior Manson Fellow, and was awarded her DPhil from Worcester College, Oxford where she studied with Robert Saxton. She teaches composition at the University of Oxford and Leeds College of Music. She was composer in residence at the Lichfield Festival, 2016 through the Sound and Music Embedded scheme.

She is a synaesthetic composer and her violin concerto Wall of Water, after the paintings by Maggi Hambling, was commissioned and first performed by the English String Orchestra with violin soloist Harriet Mackenzie, conducted by Kenneth Woods at LSO St Luke’s in 2014 and the National Gallery in 2015. It was held to critical acclaim by Gramophone as a 'work that will take ones breath away'. Her orchestral piece The Angel Standing in the Sun, inspired by the painting by J M W Turner, was first performed by François-Xavier Roth and the London Symphony Orchestra at LSO St Luke’s in 2016 (Panufnik Scheme) then again the same year by Martyn Brabbins and the BBC National Orchestra of Wales at the Lichfield Festival, broadcast on BBC Radio 3. She has also been commissioned to paint a series of ‘music maps’ for the London Sinfonietta, reviewed in The Times as 'beautifully illustrated … showing graphically how the music develops, while also paying visual homage to those wonderful medieval maps of the world'.