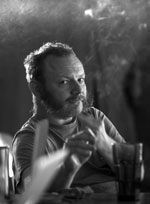 born: 20 May 1971
country: Poland
Paweł Mykietyn also studied composition with Kotoński as well as pursuing a career as a clarinettist (he formed the group Nonstrom in his early years). Much impressed by Szymański’s ‘surconventionalism’, Mykietyn soon made his mark with humorous works like U Radka (At Radek’s, for chamber ensemble, 1993). He moved on from Baroque idioms to those to which he felt closer, such as rock music, hip-hop and trip-hop. Among his most compelling works are two symphonies (2007, 2011) and the St Mark Passion (2008). This last work virtuosically combines many musical worlds, setting Polish and Hebrew, as well as telling the story backwards and inserting Christ’s genealogy as a separate thread.

Mykietyn’s award-winning music for film and the theatre also colours his creative outlook, and Wax Music for wax cylinders and piano (2012) confirms his experimental drive. His music this century is also profoundly engaged in microtonality. Shakespeare’s Sonnets for male soprano and piano (2000) was a notable staging post and the second string quartet (2006) reinforces this aspect of his music.