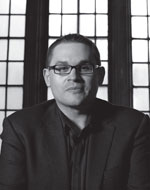 born: 25 November 1975
country: Wales
One of the world’s most performed living composers of choral music, Paul Mealor has been described as, ‘the most important composer to have emerged in Welsh choral music since William Mathias’ (New York Times, 2001) and his music is, ‘marked by something outside of himself that is beautifully spatial and evocative of landscape … it illuminates both our past and our future’ (The Guardian, 2011).

Born in St Asaph, North Wales in 1975, Mealor studied composition privately as a boy with William Mathias, at the University of York (BA Hons, 1997, PhD, 2002) and in Copenhagen with Hans Abrahamsen and Per Nørgård. He was catapulted to international stardom in April 2011 when 2.5 billion people (the largest audience in broadcasting history) heard his motet Ubi caritas performed by the choirs of Westminster Abbey and Her Majesty’s Chapel Royal, conducted by James O’Donnell at the Royal Wedding Ceremony of His Royal Highness Prince William and Catherine Middleton (now TRH The Duke & Duchess of Cambridge) at Westminster Abbey. It since topped the Classical singles charts in the USA, UK, Australia, France and New Zealand.

Mealor has composed three symphonies, an opera, concerti for piano and euphonium, cantatas and stage works, film scores and radio broadcast music alongside major choral and vocal cycles and much work for choir and solo voice all to commission and he is in much demand as a conductor, adjudicator and commentator on choral music.

Dr Mealor has received many awards and honours for his music including two Brit Awards, Honorary Fellowships from Bangor University (2013) and Glyndwr University (2012), the honorary degree of Doctor of Music (DMus) from the University of Birmingham (2019) for his ‘outstanding contribution to choral music’ and the Glanville Jones Award, from the Welsh Music Guild for his outstanding contribution to music in Wales (2013). He was appointed a Free Burgess of The City of Aberdeen in 2012 by The Lord Provost of Aberdeen and is President and Patron of many organisations. In January 2018, HM Queen Elizabeth II appointed him an Officer of the Venerable Order of St John (OStJ) and in May 2019 he was appointed to the Order of the Samurai (OSS).