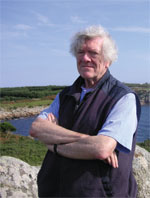 born: 2 August 1936
died: 30 April 2021
country: United Kingdom
Composer, writer, lecturer and broadcaster Anthony Payne was born in London and educated at Dulwich College and Durham University. His list of commissions includes three major premieres at the BBC Proms (another is scheduled for 2014) and works for the BBC Philharmonic and London Sinfonietta. An extensive discography includes two complete CDs of chamber music. He has published books on Schoenberg, Frank Bridge and Elgar’s Third Symphony, the completion of which, in 1997, brought him worldwide acclaim and numerous awards, including the Elgar Medal.

Earlier known as a perceptive musical journalist, he is a frequent broadcaster for the BBC and has appeared in television documentaries on Elgar, Vaughan Williams, Parry and Delius. He has been Visiting Professor at Mills College, California, Composition Tutor at the New South Wales Conservatorium, Australia, and Professorial Fellow at the University of East Anglia. He is married to the soprano Jane Manning, with whom he formed the ensemble Jane’s Minstrels in 1988.