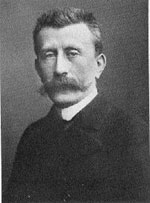 born: 23 August 1854
died: 4 March 1925
country: Germany
Moritz Moszkowski was born on 23 August 1854 in Breslau (now the Polish town of Wroclaw, but then the capital of Silesia in East Prussia) into a wealthy Polish Jewish family. He received his first musical instruction at home and in 1865 the family moved to Dresden where he was accepted at the conservatory. His first attempts at composition date from this time and he produced a piano quintet while still only thirteen. Moving to Berlin in 1869, he continued his studies, firstly at Julius Stern’s Conservatory under Eduard Franck (piano), and Friedrich Kiel (composition), and then finally at Theodor Kullak’s Neue Akademie der Tonkunst where among his fellow students were the Scharwenka brothers, Xaver and Philipp. All three later joined Kullak’s teaching staff and remained lifelong friends.

It was in Berlin in 1873 that Moszkowski made his successful debut as a pianist, and was soon touring the provincial cities as he sought to gain experience and establish a reputation. In 1875, he and Philipp Scharwenka arranged an orchestral concert in which Moszkowski was soloist in a piano concerto of his own composition. None other than Franz Liszt was quick to endorse the work and even went so far as to arrange a matinee before an invited audience where he accompanied the young composer on a second piano. (This concerto was never published and is now unfortunately presumed lost; the E major concerto published as Op 59 in 1899 was composed much later.) At about this time, Moszkowski’s first published works appeared and included the first set of Spanish Dances, Op 12 (originally for piano duet and later orchestrated by Philipp Scharwenka), which became immensely popular and assured Moszkowski’s fame, even well into the present century when his other music had all but been forgotten. Moszkowski was also no mean violinist and according to the American Amy Fay, in her entertaining book Music Study in Germany, he was often to be found playing first violin in the Academy orchestra. He also composed an excellent violin concerto, Op 30, which is long overdue for revival.

Using Berlin as his base for the next twenty or so years and whilst still retaining his teaching post, Moszkowski travelled extensively throughout Europe, giving many concerts, and although already famous as a brilliant pianist and composer, gained some recognition as a conductor. It was in this capacity that he made several visits to London at the invitation of the Philharmonic Society, introducing several of his orchestral works, although it was not until 12 May 1898 that he made his debut here as pianist, with the English premiere of the E major piano concerto.

At the height of his fame and by now very wealthy, he moved to Paris in 1897. He was now married (to Cécile Chaminade’s sister), and had a son and daughter. He was most sought-after as a teacher and whilst he could afford to be selective, he was more than generous in his help for young aspiring musicians. In 1904 it was a young Thomas Beecham who, at the recommendation of André Messager, went to Moszkowski for lessons in orchestration, and Beecham later acknowledged his master’s experience and refinement of taste in his own development. His many piano pupils included Joseph Hofmann and Wanda Landowska.

From about 1908, however, Moszkowski’s fortunes went into decline as he began to suffer from ill-health and had to cope with the tragic loss of his wife and daughter. Musical taste and opinion began to change as the new century progressed and this new order held nothing for Moszkowski who remained firmly entrenched in the traditions of the nineteenth century, along with others of his generation. He became a recluse as his popularity faded and although he continued to compose without having lost any creative ability, his output steadily decreased with his loss of ambition and enthusiasm. His last few years were spent in poverty, as he had sold the copyrights of his music and invested his wealth in German, Polish and Russian securities which had become worthless at the outbreak of war in 1914. He died in Paris on 4 March 1925. 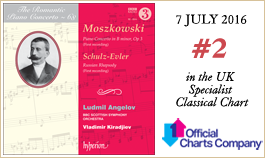