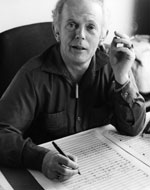 born: 21 November 1931
died: 2 March 2003
country: Australia
Malcolm Williamson (1931–2003) was one of many Australian creative artists who relocated to Britain in the mid-twentieth century, yet few expatriates were able to match the level of success that he achieved abroad. Within a decade of settling in London he had established a reputation as one of the most gifted and prolific composers of his generation and was commonly referred to in the 1960s as the ‘most commissioned composer in Britain’. His stature as a leading figure within the British music scene was publicly acknowledged in 1975 when he was appointed to the esteemed post of Master of the Queen’s Music in succession to Sir Arthur Bliss. Although he lived most of his life in England and drew on various European and British musical influences, Williamson maintained what he identified as a ‘characteristically Australian’ style of composition, stating in the 1960s: ‘Most of my music is Australian in origin … not [inspired by] the bush or the deserts, but the brashness of the cities, the sort of brashness that makes Australians go through life pushing doors marked “pull”.’ Indeed, the ‘forcefulness’, ‘brashness’ and ‘direct warmth of approach’ that Williamson recognized as distinctively Australian qualities are some of the elements that are most characteristic of his personal musical language. While encompassing a broad stylistic range, or—as Williamson preferred to call it—a variety of different ‘densities’, it is the forthright ebullience and emotional directness of his music that sets it apart from that of most other composers who were active in Britain, Europe and Australia in the latter half of the twentieth century.

Born in Sydney, Williamson began playing the piano and composing at an early age and took lessons with the Russian émigré pianist Alexander Sverjensky from the age of twelve. Three years later he was awarded a full scholarship to study the piano, French horn and violin at the New South Wales State Conservatorium, where he met and began composition lessons with its Director, Eugene Goossens. Although Williamson later came to the realization that the training he received in Australia was of a standard equal to the finest offered in the world, his studies under Goossens inspired him to seek further study abroad, and after a trial visit to London with his family in 1950, he settled there permanently in 1953. Soon thereafter he commenced lessons with Elisabeth Lutyens, a pioneer of serial composition in England, and Erwin Stein, a former pupil of Schoenberg and friend of Benjamin Britten. Not surprisingly, Williamson’s compositions from this period show an adherence to serial methods; however, there were a number of other formative influences that encouraged him to modify his compositional approach in the search for a more inclusive idiom.

Williamson’s conversion to Roman Catholicism in 1953 led to an intensive study of the music of the Middle Ages and pre-Reformation, in particular the music of English composer John Dunstable, and he also developed what would become a lifelong affinity with the religious music and theories of fellow Catholic composer Olivier Messiaen. Other stylistic influences came from the positions of employment that Williamson undertook during the mid- to late 1950s, including working as a piano teacher, a music proofreader, a vocal coach, a nightclub pianist and as a church organist. Each of these musical experiences left its mark on his mature compositional voice and inspired him to develop an inclusive musical language that could communicate instantly with listeners of all ages and backgrounds. Consequently, he began to modify his approach to serialism, which he now viewed as an ‘exclusive’ idiom, and to write music in a language that was fundamentally tonal, and above all lyrical.

During his first decade in Britain Williamson focused primarily on composing music for the instruments he could play himself, producing a large number of solo and concertante works for piano and organ. His ability to perform his own keyboard works (including the piano parts of some of the works on the present recording) was an important component in his rise to prominence as a composer and performer during the 1950s and early 1960s, and he was successful in gaining the attention of influential individuals within London’s musical society, including Benjamin Britten and Adrian Boult, who then became powerful advocates for his music. Most of the concertante works that he composed for the piano were written during this early period, and indeed his considerable skills and prowess as a pianist, as well as a composer, can be gauged from listening to the present collection of concertos, which contain fearsomely difficult parts for the piano soloist.

By the mid-1960s Williamson had extended his compositional range to encompass operatic, symphonic, chamber, solo vocal, choral, religious and educational music, as well as scores for ballet, musical theatre, film, television and radio, and over his lifetime he produced more than 250 works in a wide range of styles and genres. The creative impetus for many of these compositions stemmed from his deep interests in literature, religion, politics and humanitarian issues, and musically they incorporate influences from figures as diverse as Messiaen, Boulez, Stravinsky, Bartók and Britten, as well as from jazz and popular music, especially that of George Gershwin, Richard Rodgers, Jerome Kern and Leonard Bernstein.

Typically, Williamson’s compositional process began with the construction of a melodic idea, a ‘tiny musical germ’ or ‘melodic fragment’, as he described it, which could then be ‘used and exploited in every possible way and transformed and used within a tonal context’. This compositional approach allowed Williamson to incorporate a considerable degree of rhythmic, harmonic and textural variety. Although he was frequently criticized in the press for attempting to integrate multifarious stylistic elements into his music, and particularly for juxtaposing the ‘serious’ and the ‘popular’ within a single work, many of his compositions achieved widespread popularity and success with performers and audiences alike.

Williamson’s creative impact was recognized during his lifetime through numerous awards, posts, fellowships and honours; he was made a Commander of the British Empire in 1976, an Officer of the Order of Australia in 1987, awarded the Bernard Heinze Award in 1989, and received honorary doctorates from a number of academic institutions, including Westminster Choir College (Princeton), the Universities of Melbourne and Sydney, and the Open University of Great Britain. He was also deeply proud to be the youngest composer and first Australian to be named Master of the Queen’s Music in the 350-year history of the post.

from notes by Carolyn Philpott © 2014