born: 3 October 1828
died: 23 February 1897
country: Germany
It was at ‘Gut Zingst’, the home of Baron Christian Adolph von Seckendorff near Nebra, now in the German state of Saxony-Anhalt, that Friedrich Wieck first met Adolph Bargiel while they were both engaged in providing an education for the baron’s children. Wieck, who was acting as Hauslehrer (that is private tutor), was later to become the father of one of the most renowned pianists of her time, while Bargiel, whose role was to teach the Seckendorff children music, was later still to become her stepfather.

Friedrich Wieck was born on 18 August 1785 in Pretzsch, a small town some twelve miles from Wittenberg and about thirty from Leipzig. Although the other members of his family were not particularly interested in music, the young, and rather sickly, Friedrich was. However, when he enrolled at the University of Wittenberg, it was to study theology. Having graduated in 1807 and preached the obligatory trial sermon in Dresden, he left theology and any thoughts of a life of ministry behind, and sought work elsewhere. It was at this point that he began his career as a private tutor by joining the Seckendorff family at ‘Gut Zingst’.

Born on 1 November 1783 in Bauerwitz, Silesia (now Baborów, Poland), Adolph Bargiel was introduced to music by his father who gave him singing lessons. Later he was to study the piano, the cello and the violin. In 1802 he went to study law in Breslau (now Wrocław) as his father did not consider music to be a suitable career for any son of his. As it turned out, these studies were interrupted in 1806 by the Napoleonic War and it was then that Bargiel took up the post of music teacher to the Seckendorff children. In 1809 he relinquished this position and went to Leipzig to resume his law studies but, before long, he gave these up again in order to concentrate on music, eventually becoming a member of the Gewandhaus Orchestra.

Wieck continued as a tutor for nine years or so, working in the homes of various noble families in the neighbouring state of Thuringia, before setting himself up as a piano teacher and, with financial support from a friend, the proprietor of a piano and music shop in Leipzig. On 23 June 1816 Wieck married one of his pupils, the then nineteen-year-old Mariane Tromlitz. Daughter of a cantor in Plauen and granddaughter of Johann George Tromlitz (who was a renowned flautist and flute-maker), Mariane was a fine musician in her own right. During the first years of her marriage she sang the soprano solos in Mozart’s Requiem and Beethoven’s Mass in C major at the Leipzig Gewandhaus, and was also the piano soloist there in concertos by Ferdinand Ries, Jan Ladislav Dussek and John Field.

The Wiecks’ first child, a daughter named Adelheid, was born in August 1817 but survived only until the following May. Clara, their second daughter, was born on 13 September 1819. From the start, Friedrich was determined that, trained by him, this child would become a virtuoso pianist; she was not to disappoint him in this respect.

However, Wieck was soon proving to be such a domineering taskmaster for both his wife and their children that Mariane left him on 12 May 1824 to return to her parents’ home in Plauen, there to arrange a legal separation. She was only allowed to have Clara with her until the child’s fifth birthday, after which the law demanded that Wieck should have custody of her. The divorce was granted on 22 January 1825 and by August of that year Mariane had married Wieck’s erstwhile friend and colleague Adolph Bargiel. Wieck himself was to marry again in 1828, the same year in which Robert Schumann would travel to Leipzig to study with him. Wieck and his new wife Clementine Fechner went on to have three more children while Mariane and her new husband had four.

The first of these, Woldemar, was born on 3 October 1828 in Berlin, where his father was, by then, the director of a musical academy. Although nine years younger than his half-sister Clara, Woldemar was to develop a close and life-long relationship with her and subsequently with her husband. It was in 1840, after many years of bitter opposition from her father, that Clara was finally able to marry Robert Schumann, whom she had first met in the year that Woldemar was born.

In his early years the young Woldemar studied music at home with his parents, taking lessons from them on the piano, violin and organ. Later he studied further with Siegfried Wilhelm Dehn, who was the music librarian at the Royal Library in Berlin and an editor of the works of Bach. When he was eighteen, on the recommendation of Felix Mendelssohn and with the support of Clara and Robert Schumann, Bargiel enrolled at the Leipzig Conservatory, which Mendelssohn had founded in 1843. Among his teachers there were Ignaz Moscheles, with whom he studied the piano, and Niels Gade and Julius Rietz, who taught him composition.

Bargiel returned in 1850 to Berlin, where he attempted to earn a living first by teaching private pupils and then, gradually, by composing. He was helped in this latter endeavour by the Schumanns, who arranged for some of his early works to be published, including his first piano trio, a piece which was to become very popular during his lifetime. In his famous article Neue Bahnen (‘New paths’), written in 1853, Robert Schumann spoke of many new and significant talents which had recently arisen, and suggested that a new power in music was announcing itself. This intimation, he claimed, had been proved true by many aspiring artists of recent years even though their work was known only in comparatively limited circles. Schumann included among these ‘aspiring artists’ his half-brother-in-law Woldemar Bargiel. In time Schumann came to treasure his friendship with Bargiel and commissioned him to make piano-duet versions of some of his orchestral works.

In 1859 Bargiel was appointed professor at the Cologne Conservatory and six years later moved to a similar post in Rotterdam, the city in which he met his future wife Hermine, who was the sister of fellow composer Berthold Tours. Apparently it was a performance in The Hague of Bargiel’s Overture to Medea, Op 22, that helped secure this position for him. It was during his time in Rotterdam that Bargiel conducted the first performance in the Netherlands (on 22 April 1870) of Bach’s St Matthew Passion. The following year he was to conduct his own Symphony in C major, Op 30, during a concert which also included Beethoven’s Choral Fantasy and works by Schumann—notably the latter’s piano concerto, with Clara as soloist. Bargiel’s final academic appointment was at the Hochschule für Musik in Berlin, where he taught from 1874 until his death on 23 February 1897.

In addition to his teaching and composing, Bargiel also worked with Johannes Brahms on the complete editions of the works of both Robert Schumann and Frédéric Chopin. It was Brahms whom Schumann had singled out in his Neue Bahnen article as the only young musician who could ‘give expression to the times in the highest and most ideal manner’ and was, indeed, the chosen one, the man of destiny. Brahms and Bargiel would go on to become great friends, not least because of their mutual concern for Robert and Clara Schumann, and they very much enjoyed discussing, and sometimes criticizing, each other’s music.

As a composer, apart from his symphony, various overtures and some choral music, Bargiel concentrated mainly on works for the piano (including a set of three ‘character pieces’, Op 8, which he dedicated to Clara) and chamber music—most notably four string quartets, an octet in C minor (Op 15a) and three piano trios (Opp 6, 20 and 37). 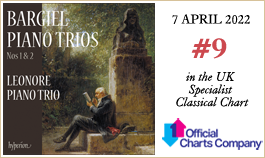