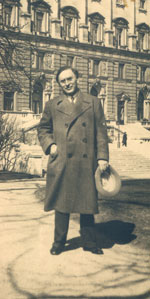 born: 7 November 1888
died: 23 July 1968
country: Russia
Julius Isserlis was born in 1888 in Kishinev (now Chisinau in Moldova, though then part of Russia). His mother was a midwife and his father, having been a cantor in the local synagogue, had retrained as a travelling dentist to supplement his income. Julius started playing the piano when he was four; he showed such early musical promise that the local Jewish community later applied for him to study at the Kiev Conservatoire under Professor Wlodzimierz Puchalski. In those days special permission was required for a Jew to travel to Kiev; eventually this was granted to the nine-year-old child. However, after just one year Puchalski sent him on to Moscow to study with the world famous director of the Moscow conservatoire, Vasily Safonov. At the age of ten he was by far the youngest pupil of this very strict professor. (A few years later, when the fourteen-year-old Julius omitted his least favourite of Beethoven’s Eroica Variations at a students’ concert, Safonov forced his pupil as a punishment to repeat this particular variation in every possible key at his next lesson!)

Harmony, counterpoint and composition were all on the syllabus and Isserlis was lucky enough to study the latter with Sergei Taneyev, who had been Tchaikovsky’s favourite student and whose other pupils included Rachmaninov, Medtner, Glière and Scriabin. Halfway through Julius’s studies, Taneyev retired to his country house near Moscow, where he was looked after by his old nanny. Here he taught Julius free of charge, lessons often lasting well into the night after which a bed and excellent meals were provided. Taneyev had also studied mathematics, history, natural and social sciences and philosophy—not surprisingly Julius Isserlis adored his teacher. At the age of sixteen he finished his studies in Moscow and was awarded the prestigious gold medal of the Conservatoire, where his name remains today engraved on the main board in the entrance hall.

In 1907 Julius Isserlis went to Paris to have lessons with Charles-Marie Widor, the famous organist and composer of the ubiquitous Toccata (from his fifth Organ Symphony). Coincidentally, Scriabin, whom Julius greatly admired, was in Paris at the time. On hearing Julius play, Scriabin recommended him as a soloist in a concert at Carnegie Hall in New York where he would be accompanied by the Russian Philharmonic Orchestra. This was a great success, and had he stayed on in the USA Julius would have been assured of a glittering career there. However, such was his homesickness for his family and Russia that, against all advice, he returned after just three weeks, never again to return to the States.

On his return to Moscow Isserlis was appointed professor at the College of the Imperial Philharmonic Society—the sole Jewish teacher there. In 1916 he gave a recital in the Odessa, the beautiful city on the Black Sea whose lively cultural life was still largely unaffected by the 1914 war. The recital was attended by a wealthy music-loving family, the Rauchwergers. Their oldest daughter, Rita, was also a pianist, and soon afterwards she and Julius were married; their son, George, was born in 1917.

Meanwhile, life in Odessa was becoming increasingly dangerous: the Bolsheviks were approaching the city. After a midnight raid on their home Julius and his family made an abortive attempt to escape on a British ship (on the way to the harbour the horse-drawn cart in which they were travelling got caught in the crossfire between the advancing Reds and the defenders). Shortly thereafter, it became apparent that Julius had contracted typhus from a lice-infested soldier. Ironically, the family’s failure to board the ship may have saved Julius’s life; had they made it he might well have been disposed of to prevent infecting the other passengers!

After a few months of convalescence Julius Isserlis went to Moscow to present himself to the authorities. Under Lenin’s Communist regime, musicians were sent all over the country to play for the workers in factories, hospitals and other institutions, the pianists usually performing on half-broken instruments. Life was very hard and anti-Semitism was rife. When in 1922 Lenin issued a decree allowing just twelve musicians to tour abroad as ambassadors for the Soviet Union, Julius reluctantly left his homeland; in 1923 he undertook the long train journey with his family via Riga, Berlin and Prague to Vienna.

Finding a flat to rent in Vienna was initially hard; one very old landlady refused to take in a pianist because she recalled her aunt having let rooms to a mad, deaf musician who spat all over the floor—Beethoven! However, having been joined by several relations and still hoping at some point to resume his disrupted career in Russia, Julius decided not to follow the example of several of his fellow musicians by travelling on to the USA. He resumed his career in Vienna, becoming a respected member of the well-documented musical world there, playing, teaching, sitting on juries, composing, and receiving visits from several of the Russian musicians passing through Vienna, including Nathan Milstein and Josef Lhévinne.

Needless to say, life in Vienna became increasingly dangerous as the Third Reich grew in power. With miraculously lucky timing Julius was engaged to travel to Britain for his first tour there in the very week of the Anschluss—the annexation of Austria into Nazi Germany in 1938. After four anxious months he was granted British residency and his family was finally able to join him in London.

During the war years, despite the struggle of starting to rebuild his career all over again at the age of fifty, Julius was able to earn a living in London, teaching, playing lunchtime recitals at the National Gallery, broadcasting for the BBC, giving two Chopin recitals at Wigmore Hall and touring Britain with the Wessex Philharmonic (the precursor of the Bournemouth Symphony Orchestra). After the war, however, he was gradually superseded by an influx of younger artists, and although he remained a fine pianist until his early seventies he was provided with fewer and fewer concerts by his agents. He and Rita moved to a flat in West Kensington, where his grandchildren—the present writer, my sister Annette and my brother Steven—used to visit ‘Babushka’ and ‘Diedushka’ every weekend, playing around on the two grand pianos that were crammed into the small living room. In 1963 Julius contracted Parkinson’s disease and he died five years later.