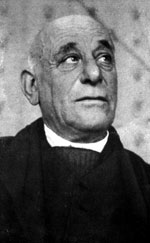 born: 12 July 1876
died: 5 March 1944
country: France
The poet Max Jacob (1876–1944), the son of a Jewish tailor, was born in Quimper in Britanny—a very Catholic and almost mystically superstitious area of France, at least in those days. Right from the start he felt both deracinated by, and attracted to, the mysticism and folklore of his natal region. In his twenties he came to Paris and became close friends with Picasso and Apollinaire, who were fascinated by his endless verbal dexterity and sense of fantasy; Jacob, also an able painter, became very much part of the Bateau-Lavoir community. In 1909 he claimed that Christ appeared to him in a vision and he converted to Christianity. Jacob’s Le laboratoire central (1921) was the source of Poulenc’s cantata for voice and orchestra, Le bal masqué (FP60), probably the composer’s most phantasmagorical work. Poulenc was often deemed a combination of moine and voyou (monk and ragamuffin); Max Jacob was much more so, and to a degree that was almost dazzlingly bizarre. Poet and composer got on exceedingly well. Jacob retreated to a life in contemplation outside Paris in Saint-Benoît-sur-Loire (1921–7), returning to Paris for ten years (during which period Poulenc’s first Jacob settings, Breton in inspiration, were composed), before returning in 1937 to his retreat, where he is buried. Convinced he would die a martyr, Jacob was arrested by the Gestapo at the end of February 1944 and died nine days later, of bronchial pneumonia, at the notorious holding camp of Drancy.