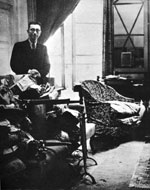 Robert Desnos shortly before his arrest by the Gestapo in 1944

born: 4 July 1900
died: 8 June 1945
country: France
Robert Desnos (1900–1945) was a born Parisian. He played an important role in the early days of Surrealism when he was able to dictate a stream of words in any conditions—he had only to close his eyes and poetry erupted from him, also when he was more or less asleep. Always left-wing, but too individualistic to become identified with dogmatic Communism, Desnos was eventually spurned by his more hard-line Surrealist colleagues and moved into a period of radiophonic experimentation, broadcasts with the collaboration of other artists (Kurt Weill for example) that were valued at the time for their imaginative and avant-garde use of the medium. During the war he was a member of the resistance while editing the newspaper Aujourd’hui, remaining outspoken and courageous in his artistic and personal beliefs. He was arrested on 22 February 1944, sent to Germany and died on 16 June 1945 at Terezín.