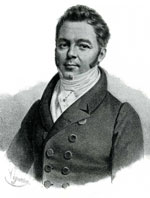 born: 27 July 1784
died: 3 October 1853
country: France
Born in Clermont-Ferrand in 1784, George (or Georges) Onslow was a Classical–Romantic composer rated highly in his lifetime (he was even dubbed, flatteringly, ‘the French Beethoven’), only for his reputation to plummet after his death. Onslow’s background was colourful: his father, Edward Onslow, an MP from an aristocratic political family, was forced to flee England in 1781 to avoid prosecution for alleged homosexual acts. In France he quickly found his feet, marrying a French aristocrat from the Auvergne, Marie de Bourdeilles, and investing in property in the Clermont-Ferrand region.

As a boy of noble family George was trained in the arts of fencing, horsemanship and hunting (a favourite pursuit until, in 1829, a stray bullet rendered him deaf in one ear), as well as music. Although details of his early years are sketchy, he seems to have arrived in London around 1800, after the Terror had forced his family to flee first to Rotterdam, then to Hamburg. George took keyboard lessons with J L Dussek and J B Cramer in London, then apparently spent a period in Germany and Austria. Back in his native Auvergne, he studied the cello and composed his first works in 1806–7: a set of three string quintets with two cellos, and his sole piano sonata, published in Paris as his Opus 2 and dedicated to ‘Miss Charlotte Onslow’—i.e. his cousin, Georgina Charlotte Onslow. Over the next four decades this gentleman farmer-cum-composer would make his name in France and Germany (where his admirers included Robert Schumann) primarily through his prolific output of some seventy quartets and quintets: a rare example of a French composer devoting himself to these quintessentially Teutonic genres.