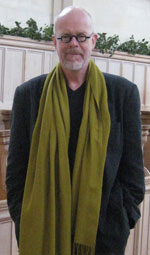 born: 10 March 1950
country: Sweden
Born in Kalmar, Bo Hansson sang as a treble in his local church choir, going on to study guitar at the Royal Academy of Music in Stockholm, graduating in 1978. By 1980 he was teaching guitar and chamber music at Södra Latins Gymnasium in Stockholm, a secondary school specializing in the training of future professional musicians. With the conductor Gary Graden he also developed composition workshops with children. His professional career has been varied and wide-ranging. As a guitarist he often works in collaboration with other artists, particularly the Dutch guitar player Eric Lammers in the ‘Lammers and Hansson Guitar Duo’. He is also interested in combining guitar and voice and for many years was a singer, guitarist and arranger for ‘Skogsfiol och flöjt’ a well-known group in Sweden. For a number of years he wrote choral arrangements of folk and popular songs, often with a role for the guitar. At the age of thirty-five Hansson became increasingly interested in musical composition and took some private lessons from Swedish composer Johan Hammerth. A desire to write in a more contemporary classical style ensued and led to the choral piece Som när handen, which won a major national composing competition in 1993. Since that time he has been regularly commissioned to write new choral works and has developed a close relationship with two choirs associated with Gary Graden, the St Jacob’s Chamber Choir and the Orpheus Vocal Ensemble.