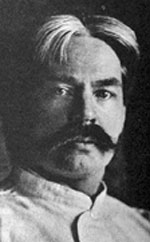 born: 18 December 1860
died: 23 January 1908
country: USA
Edward Alexander MacDowell is hailed as ‘America’s first important composer’. Louis Moreau Gottschalk (1829–1869) has a far stronger claim to that title, important in that he was among the earliest to use the indigenous rhythms and melodies of America in his music, indicating a direction which others ignored for nearly half a century. MacDowell, for all the quaint titles he devised, was a thoroughly, one might say completely, European composer. It is rare to find in MacDowell’s music any significant use of indigenous American themes or rhythms (though, paradoxically, his best-known piece, To a Wild Rose from ten Woodland Sketches, Op 51, makes use of a simple melody of the Brotherton Indians). True, most of his miniatures composed after 1895 take their inspiration from the fields, lakes and forests of America that MacDowell loved so very deeply, but what you are hearing when you listen to his music are richly melodic, highly poetic, superbly crafted compositions produced, had you not been told otherwise, by a greatly gifted German. The title to which MacDowell has a rightful claim is ‘the first American-born composer to have his works favourably compared with those of his European-born peers’.

MacDowell was born at 220 Clinton Street, New York, on 18 December 1860 (a surprisingly large number of sources cite 1861) to Thomas MacDowell, a Manhattan milk dealer of Scottish-Irish descent, and his artistically inclined wife. He had his first piano lessons at the age of about eight. His first three teachers were Latin-American: one Juan Buitrago (a friend of the family), Pablo Desvernine and, briefly, the great Teresa Carreño (1853– 1917), the much-married Venezuelan virtuoso who later became one of the first pianists to include MacDowell’s compositions in her programmes. In 1876 it was off to Europe with mama, then on to study with Marmontel at the Paris Conservatory where one of his fellow students was Debussy. Here he remained from February 1877 until, at odds with the teaching procedures and disappointed with his progress, he left in September 1878. (During his stay in Paris, MacDowell, a talented artist like his father, was offered a scholarship to the Ecole des Beaux-Arts.) Having established her son in Wiesbaden, Mrs MacDowell returned home, while Edward took lessons from Louis Ehlert (1825–1884), a former pupil of both Mendelssohn and Schumann. But it was not until he enrolled in 1879 at the newly founded and prestigious Hoch Conservatory in Frankfurt that he found his first empathetic and illustrious teachers in the form of Carl Heymann (piano) and Joachim Raff (composition). Raff was a major influence in MacDowell’s life (the two became firm friends), first in the development of his compositional style and second by introducing his pupil to Liszt. The American performed part of Schumann’s Quintet in Liszt’s presence during a visit to Frankfurt by the Wizard of Weimar and, later, played Liszt’s Hungarian Rhapsody No 14 to the composer.