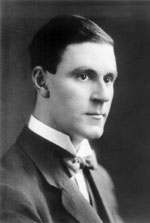 born: 17 July 1885
died: 30 July 1943
country: United Kingdom
Dale was born in London on 17 July 1885, growing up in comfortable circumstances. What Dale might have become remains a fascinating question, but contrasts a shade depressingly with what actually ensued. At the outbreak of the Great War he had the misfortune or misjudgement to be on holiday at Ingolstadt, where he was intercepted and taken with his fellow composers Edgar Bainton and Frederick Keel to Ruhleben internment camp outside Berlin. Later he was held on a Dutch farm under less stringent conditions, but it is difficult to avoid wondering whether the whole experience contributed to a decline in health following his repatriation in March 1918, and to a restricted compositional output.

Dale eventually returned to the professorship of harmony at the RAM which he had initially taken up in 1909. He examined for the Associated Board (ABRSM) in Australia and New Zealand in 1919–20. He was appointed Warden at the Academy in 1936, in the same year beginning a period of service to the BBC Music Advisory Panel which ceased with his death from a heart attack on 30 July 1943. This occurred after rehearsals for his orchestral poem, The Flowing Tide, for which he had made the first sketches in Brussels in 1924. Dale married twice, the second time very happily, and a sympathetic article on The Flowing Tide by Christopher Foreman in 2002 suggested that Dale had fully recovered from his internment experience, composing with renewed purpose and spirit in his final years.