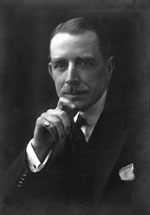 born: 29 May 1868
died: 23 April 1943
country: United Kingdom
Baron Frédéric Alfred d’Erlanger was a banker, born in Paris but with a German father and American mother, who moved to London in his teens. He was naturalized British and long resident in London, where he was involved in promoting music and was later a trustee of the London Philharmonic Orchestra and on the board of the Royal Opera House, Covent Garden. He was also a composer, his teacher being Anselm Ehmant, a close friend of the family, and although his catalogue of works is not huge, throughout his life there was a steady stream of first performances by the most celebrated artists and orchestras of the day. Many record collectors will have come across him as the composer of the ballet music Les cent baisers, recorded by Dorati and the London Symphony Orchestra after its success when danced at Covent Garden in 1935.

D’Erlanger had first appeared as a composer with his opéra comique Jehan de Saintré, produced in Aix-les-Bains in 1893 and in Hamburg the following year. He first appeared at Covent Garden as a stage composer in July 1897, under the pseudonym Frédéric Regnal, with the opera Inès Mendo after Mérimée’s comedy. Later, with the German title Das Erbe, it was produced in Hamburg, Frankfurt and Moscow.

If we track his music through his published works, and later through performances at the Queen’s Hall Promenade Concerts, we find a Prelude for violin and piano published in 1895 and an album of six songs in 1896. He appeared at the Proms in September 1895 with a Suite symphonique, and by 1900 had published a Violin Sonata in G minor and in 1901 a notable Piano Quintet, which was given a rousing reception at the 1902 ‘Pops’ at St James’s Hall. New works appeared at regular intervals during his life: just following the Proms we find the Andante symphonique Op 18 for cello and orchestra in October 1904, and the symphonic prelude Sursum Corda! in August 1919. There was also the Concerto symphonique for piano and orchestra from 1921 and the gorgeous Messe de Requiem of 1930, a work admired by Adrian Boult, who arranged its broadcast in 1931 and a public performance in Birmingham in 1933, where it was revived as recently as March 2001. The briefly popular orchestral waltz Midnight Rose was recorded by Barbirolli in 1934.

Possibly d’Erlanger’s most famous work was his opera, in Italian, after Thomas Hardy’s Tess of the d’Urbervilles. Someone with d’Erlanger’s connections would only consider the best as his collaborators and he asked Luigi Illica, Puccini’s librettist, to write the libretto. Its first production at the San Carlo Theatre in Naples in 1906 was interrupted by a volcanic eruption of Mount Vesuvius. The Naples production spawned early recordings by Amedeo Bassi and Alessandro Bonci of Angel Clare’s aria in Act I. Produced in London in 1909 with no less a cast than Emmy Destin as Tess and Zenatello as Angel Clare, it was revived in 1910 and later produced at Chemnitz and Budapest. Tess was revived by the BBC in 1929 in an English version. In 1910 his opera Noël was produced at the Paris Opéra and subsequently in Chicago, Philadelphia, Montreal and Stockholm.