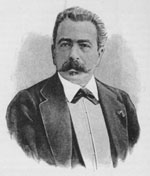 born: 23 May 1837
died: 11 November 1912
country: Poland
The Polish pianist and composer Józef Wieniawski was born in Lublin in 1837, the younger brother, by two years, of the more famous violinist Henryk. Józef studied at the Paris Conservatoire under Pierre Zimmermann and his pupils Antoine Marmontel and Charles-Valentin Alkan. He also received lessons from Liszt. At the age of twelve he had already won first prize in a Conservatoire competition, and the following year formed a duo with his brother with which they began to make names for themselves in the musical circles of the French capital. Their reputation was particularly enhanced by a duo written by their uncle, the famed virtuoso pianist and composer Eduard Wolff, an intimate friend of Chopin (who had just died). Wolff’s influence now became crucial to their respective burgeoning careers. This was a time when virtuoso performances of instrumental paraphrases of operatic arias and ensembles were all the rage, particularly in the salons of the city. In 1850 the young Józef was acclaimed for his playing of Thalberg’s Introduction and Variations on the Barcarole from Donizetti’s L’Elisir d’amore, Op 66, and, together with his brother Henryk, a fantasy (by Henryk) on themes from Le prophète by Meyerbeer. From 1857 Józef began to undertake extensive tours of European capitals, but in 1866 he moved to Moscow, where he taught at the Conservatoire. In 1869 he founded his own music school, and was appointed director of the Warsaw Musical Society in 1875–6.

Wieniawski was particularly renowned for his tireless championing in the West of the music of the nationalist Polish composer Stanislaw Moniuszko. Finally he moved to Brussels where, as a chamber music player and accompanist, he took a prominent part in the musical life of the city, and became a professor of piano at the Conservatoire. He died in 1912.

Wieniawski’s compositions for the piano are understandably vehicles to showcase his virtuosity in the concert hall and private salon. They include polonaises, waltzes, mazurkas and concert études, as well as a Fantaisie and Fugue, two piano sonatas and a Duo Polonaise. There is a little chamber music consisting of a string quartet, piano trio and cello sonata; and for orchestra he wrote a Suite romantique, the Overture Guillaume le Taciturne, a Rêverie Op 45, and the Piano Concerto in G minor Op 20, written in about 1858, published in Warsaw in 1860, and dedicated to Leopold II, King of the Belgians.

from notes by Christopher Fifield © 2010