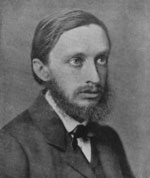 born: 7 December 1840
died: 3 December 1876
country: Germany
Hermann Goetz was born in 1840 at Königsberg (now Kaliningrad), the son of a brewer. He fulfilled his long-standing desire to become a musician at the age of twenty when he went to Berlin’s Stern Conservatoire in 1860. Of his teachers there, the most significant was the pianist and conductor Hans von Bülow, Liszt’s son-in-law. Three years later Goetz moved to Winterthur in Switzerland as a church organist, but this was also a doomed attempt to cure the tuberculosis he had contracted in childhood. Brahms visited in 1865, and they became uneasy friends (not uncommon in relationships with the greater man), but two years later Goetz enjoyed an annus mirabilis when he married, resumed contact with von Bülow and met Raff, who recommended him to the music publishers Breitkopf und Härtel.

This period of hope and optimism was the time during which he wrote his Piano Concerto in B flat major, Op 18 (he had drafted an earlier piano concerto as a student), and his finest chamber work, the Piano Quartet in E major, Op 6. It was not long before his works included Lieder, choral works and a symphony (of which only a fragment remains). This symphony was played at Basle on 3 March 1867, but it was his opera Der Widerspenstigen Zähmung (produced in Mannheim in 1874), based on Shakespeare’s Taming of the Shrew, which brought him fame both at home and abroad. His Symphony in F major owes much to Beethoven, as most of that genre does in the half-century between Beethoven and Brahms, and was excessively praised by George Bernard Shaw. In 1875 Goetz made a brave attempt at a second opera (Francesca von Rimini), but it was a race against time that he lost the following year when he finally succumbed to his illness four days short of his thirty-sixth birthday. As with so many composers who fail to achieve the highest rank, his music was rarely played after his death. Though overshadowed by many greater composers during his lifetime, and despite being based outside the mainstream of musical activity in his isolated small Swiss town, his distinctive music is full of melodic gift and mastery of form.

from notes by Christopher Fifield © 2010