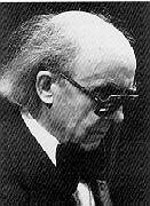 born: 15 February 1907
died: 8 May 1991
country: France
The French organist and composer Jean Langlais was born on 15 February 1907 at La Fontenelle, Ille-et-Vilaine, in the region of Brittany. Blind from childhood, he received his education at the Institut National des Jeunes Aveugles in Paris, where he studied piano, organ and harmony. His organ teacher was the great André Marchal, himself blind and a former pupil of the Institut, and, like so many French organists (including, eventually, Langlais himself) a skilled improviser.

With Marchal’s guidance, Langlais graduated in 1927 to the Paris Conservatoire where, under the tutelage of Marcel Dupré, he won a first prize in organ-playing in 1930. His composition teacher was Paul Dukas (composer of the popular L’Apprenti sorcier) and he made there the acquaintance of a promising fellow student, the young Olivier Messiaen. At the Conservatoire also he came under the powerful influence of Charles Tournemire, organist of Ste Clotilde and sometime pupil of d’Indy, who dazzled him with his legendary gift for extemporization, and whose compositions impressed him deeply—especially the vast L’Orgue mystique, with its imaginative use of Gregorian chant. Having won a number of prizes for composition, interpretation and improvisation, Langlais took up an appointment at his old school, the Institut National des Jeunes Aveugles, conducting the choir and teaching organ and composition. He became organist first of St Pierre de Montrouge and later, in 1945, of Ste Clotilde where his predecessors, apart from Tournemire, included no less a dignitary than César Franck.

In addition to his work in Paris, Langlais taught and played often in the United States, and many of his works were written for American performers and audiences. A man of profound religious conviction, his music was almost exclusively sacred, inspired by his love of the Catholic liturgy and of Gregorian chant.