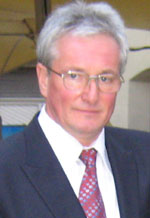 born: 5 June 1954
country: Lithuania
Lithuania, in common with fellow Baltic States Latvia and Estonia, sustains a rich singing tradition, one at the heart of the country’s cultural heritage. This is a choral tradition not confined to churches and concert halls but a part of everyday life and a key part of the national consciousness. A clear indicator of the strength of this phenomenon is the national song festivals drawing upwards of 30,000 participants. Centuries of political and cultural domination from foreign powers largely limited indigenous music-making to rural folk songs. This repression led to the survival of these old genres right into the twentieth century and, as Lithuania began to assert its independence, it was these national songs that drew its people together in an awakening of ethnic consciousness and self-esteem. Throughout the restrictions of Soviet occupation (1940–90), safeguarding the source of folk music’s vitality became art’s most important stimulus, and therefore singing remained central to the cultural life of the country. As time passed the concept of nationalism may have changed but Lithuania’s affinity with folk songs and sense of community through choral singing has remained.

Born in Vilnius in 1954, Vytautas Miškinis is the doyen of current Lithuanian choral culture. For thirty years he has been the artistic director of the award-winning Lithuanian boys’ choir Azuoliukas. It was with this choir that Miškinis began his musical career as a treble aged seven. While still a student he worked as an accompanist and conductor for the choir’s founder Hermanas Perelsteinas before taking over the artistic direction of the choir himself at the age of twenty-five. Since 1979 this ‘little oak tree’ (as the choir’s name translates) has grown into a school of music for 450 young musicians.

Miškinis has always had a broad and eclectic interest in choral music. His lessons in composition, taken independently from the state system, encouraged a greater degree of artistic freedom. His music, while bearing identifiable Lithuanian roots, is a synthesis of different influences carefully shaped and moulded with an experienced understanding of choral orchestration. Like many other Baltic composers of the same generation, Miškinis takes an essentially diatonic approach but with much overlaying of harmonies and coloured cluster-chords. Chords resonate with many perfect fifths and fourths reinforcing the harmonic series. What makes the music unmistakably Lithuanian is the influence of two folk-song genres: one, a homophonic type in which harmonies are created from the first, fourth and fifth notes of the scale, and the other an interestingly dissonant contrapuntal type from north-eastern Lithuania called sutartine, in which the individual lines together form a chain of unresolved seconds. Sutartines have been crucial in the reinvention of folk music as high art.

Repetition permeates much of Miškinis’s music but he is not to be considered a minimalist. Vocal textures are certainly enhanced by a judicious use of carefully controlled aleatoric effects and ostinatos, however coloration of the text remains at the heart of Miškinis’s creative spirit: ‘I do not experiment with the sound. The essential for me is the meaning of the lyrics. The content. For that reason I accept any means of expression that refers to the meaning of a word.’ Lithuania, like its vast neighbour Poland, is largely Catholic. Although brought up a Catholic, Miškinis no longer considers himself a strong believer and yet he is drawn to many liturgical texts for their universal ideals, their ‘unique poetry’.