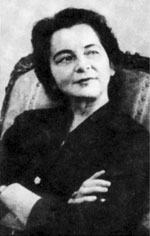 born: 5 February 1909
died: 17 January 1969
country: Poland
Bacewicz was one of the most significant composers of the mid-twentieth century, with strong roots in the culture of Paris, where she studied both composition and violin in the early 1930s. Her most striking music is that which draws on her experience of the neoclassicism of inter-war France. She emphasizes neoclassicism’s vitality and clarity while at the same time giving it a combination of delicacy and muscularity which is all her own. While she demonstrates both wit and joie de vivre, her music is never frivolous.

Bacewicz’s training as a violinist, her experience as leader of the Polish Radio Orchestra towards the end of the 1930s, and her tours as a concerto soloist after World War Two led to her strong commitment to enrich the string repertoire. She wrote seven violin concertos (as well as one for viola and two for cello), seven string quartets and a quartet for four cellos, five sonatas and a partita for violin and piano, two sonatas for solo violin, and a number of encore pieces. The Concerto for String Orchestra (1948) is her most celebrated work