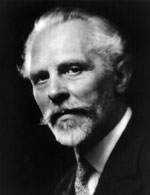 born: 14 December 1873
died: 12 July 1953
country: Belgium
In a biographical pamphlet published by J & W Chester in 1922, Lord Berners described Joseph Jongen as a composer whose music had ‘remarkable lyric charm and dramatic power’. That acute summary of his musical language makes his neglect all the more puzzling. If Jongen is known at all, it is largely through his finely crafted organ music, rather than his substantial output for orchestra or his chamber music (including three fine string quartets). Born in Liège on 14 December 1873, his father was a cabinet-maker and wood-carver who specialized in church furnishings. But he was also a keen amateur musician (he had studied the trombone in his youth), who had encountered the best music Paris had to offer when he spent six months there in 1867. Jongen began to study the piano when he was seven years old, and his teacher (who was organist of Saint-Jacques in Liège) soon encouraged him to take up the organ as well. Jongen continued his studies at the Conservatoire in Liège while still singing in the choirs of several churches. His time at the Liège Conservatoire was formative, with his first chance to hear Eugène Ysaÿe, and visits to the city by composer–conductors such as Vincent d’Indy and Richard Strauss.

Jongen was a brilliant student and had already started to demonstrate his gifts as a composer in his early teens. In 1897 he won the Belgian Prix de Rome, which gave him the chance to study in Italy and to travel. He made the most of this opportunity, setting out first for Berlin in 1898, where the concerts conducted by Arthur Nikisch and Felix Weingartner made a lasting impression, as did performances of Strauss’s Heldenleben (conducted by the composer) and Jongen’s first hearing of Brahms’s Violin Concerto, played by Joseph Joachim. One of his grandest works from this period was a symphony, written under the influence of Strauss’s tone poems. He took it to Strauss and was delighted to be welcomed warmly and taken seriously, recalling later that Strauss’s comments were ‘like beams of light, as if a thick curtain had been lifted from my eyes’. 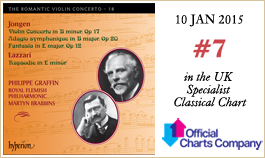