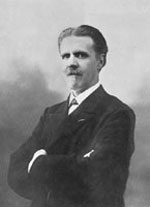 born: 27 March 1851
died: 2 December 1931
country: France
In view of the sheer range of the distinguished contributions to the musical culture of France by Vincent d’Indy (1851–1931) during the Third Republic—as a composer, conductor, teacher and early-music revivalist—the subsequent sharp decline in his reputation is particularly unjust. Known today mainly as the one-work composer of the Symphonie sur un chant montagnard français (Symphonie cévenole, 1886), his fine body of works in many forms—including opera, orchestral and chamber music—shows an imaginatively eclectic engagement with the musical trends of his age. While his early works are strongly influenced by the Wagner fever which gripped musical and literary Paris in the final decades of the nineteenth century—he himself was present at the Bayreuth premiere of Der Ring des Nibelungen in 1876—the later ones admit some influence of Debussy, whom he encouraged. Nevertheless, he countered what he perceived as the formally disintegrative tendencies of Wagnerism and Impressionism with the strong sense of classical musical structure instilled by his revered teacher César Franck, based on the intensive study of Bach and Beethoven.

In contrast with Franck—a church organist by profession—d’Indy possessed a greater orchestral imagination gained in his early years as a freelance horn player and subsequently as timpanist in the Orchestre Colonne. At the same time, as a fervent French regionalist and Roman Catholic, he regarded both the folk music of his beloved native Ardèche and the traditional Gregorian chant as a prime means of renewing the melodic dimension of opera and symphonic music. His compositional ideas and philosophy were systematized in his once influential and compendious Cours de composition musicale, the basis of his teaching at the Schola Cantorum in Paris, of which he was among the founders in 1894. Nevertheless, this strongly pedagogic aspect of his work should not be permitted to obscure the quite independent merits of his best music, characterized by a colour and atmosphere very far removed from academic aridity.