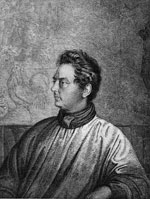 born: 9 September 1778
died: 28 July 1842
country: Germany
Clemens Brentano was a notable figure in the German Romantic movement, an associate among others of Wieland, Herder, Goethe and Schlegel. Restless and unconventional by nature, he spent some years wandering the countryside with his guitar on his back like a medieval minstrel. His close and lifelong friendship with Achim von Arnim, who married his sister Bettina, provided some stability, and created the work for which they are both best known, the collection of German folk poetry known as Des Knaben Wunderhorn.