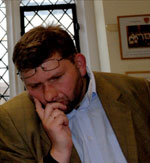 born: 19 September 1968
country: Poland
Of the younger generation of Polish composers specializing in sacred choral music, Paweł Łukaszewski (b.1968) unquestionably stands out, not only for his ability to encapsulate the expressive essence of a text with unrivalled immediacy and economy of technical means but also for his facility for idiomatic vocal writing. Łukaszewski arguably has Church music in his blood, having been born in the southern Polish city of Czestochowa, since the fourteenth century a major centre of pilgrimage on account of the celebrated Black Madonna icon of the Virgin Mary housed in the Paulist monastery of Jasna Góra (Shining Mountain), and today home of the annual Gaude Mater International Festival of Sacred Music.

On the face of it, Łukaszewski’s musical language has obvious affinities with the compositional idioms of his older compatriots Henryk Górecki (b1933) and Wojciech Kilar (b1932), and also with those of the Estonian Arvo Pärt (b1935) and the Englishman John Tavener (1944-2013). At the heart of his musical language is what Łukaszewski prefers to term ‘renewed tonality’. While this involves the deployment of major and minor triads, which act as core points of reference, and the use of fragmentary vestiges of common-practice harmony, it is primarily founded on the non-functional progression between distantly connected triads and chords with added sixths, sevenths and/or ninths, in addition to more exotic sonorities constructed, for example, from pairs of interlocking perfect fifths. This ‘extended’ tonal sound world is enriched by highly selective use of vocal effects such as glissandi, parlando (speaking) and susurrando (whispering), all of which occur invariably in direct response to clear textual stimuli. Ultimately, the resonances between Łukaszewski’s works and those of his precursors prove to be only superficial: his harmonic palette is more subtle and immensely more varied than those of Górecki, Pärt and Tavener, and he is apt to eschew tried-and-tested formulae, creating an essentially unique mode of harmonic operation for each piece. Equally individual are his meticulous attention to proportional concerns (particularly the placing of climaxes) and metrical patterns, and his derivation of musical structures from the formal and narrative parameters of his texts.

from notes by Paul Wingfield © 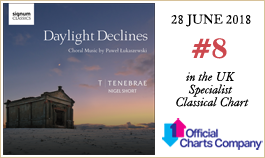