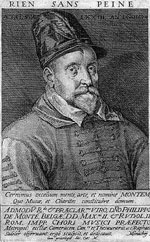 born: 1521
died: 4 July 1607
country: Flanders
Philippe de Monte was one of the most extraordinarily prolific composers of the Renaissance, perhaps of all time. Certainly in the madrigal genre he outstripped all competition, with no fewer than thirty-four books published between 1554 and his death in 1603, containing over a thousand individual pieces. While his sacred output is less voluminous, it is nonetheless impressive, with thirty-eight Mass settings, approximately 250 motets, and 144 madrigali spirituali.

Born in 1521, Monte appears to have been a choirboy at the church of St Rombout in Mechelen. He worked in Italy for several periods, including a spell as music tutor to the Pinelli banking family in Naples. In the 1550s he was associated with the chapel of Philip II of Spain, visiting England in that capacity for the wedding of Philip to Mary Tudor; his meeting with William Byrd on that occasion probably led to an exchange of eight-part motets between the two composers, bemoaning the fate of Catholics in England (Monte: Super flumina Babylonis; Byrd: Quomodo cantabimus). But it is for his thirty-five-year tenure of the post of Kapellmeister at the Austrian Habsburg court that Monte is best known. Employed by Emperor Maximilian II in 1567, he remained in Habsburg service for the rest of his life, depite a change of emperor (Rudolf II ascended the throne in 1576) and his own requests from 1578 onwards for permission to retire. His work is described in Grove’s Dictionary as ‘unfold[ing] in unhurried, sometimes quite melismatic lines, [with] little evidence of post-Tridentine concerns about textual clarity’.