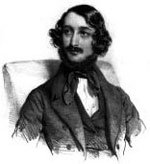 born: 6 May 1814
died: 8 October 1865
country: Moravia
As a virtuoso violinist, the Moravian Heinrich Wilhelm Ernst (1814–1865) was a legend in his own lifetime. He died before the era of sound-recording, and his personal wizardry and magnetism can only dimly be recaptured in the written testimony of his contemporaries. Yet to a surprising extent it lives on in his own works for his instrument: for he was a composer who significantly extended the boundaries and meaning of bravura technique. Unfortunately Ernst has long been the preserve of violin specialists only—unjustly, considering his quality as a musical thinker.

Born in Brno, Ernst swiftly showed signs of talent, first performing in public at the age of nine. He entered the Vienna Conservatory, where he studied the violin with Joseph Böhm and Joseph Mayseder, and composition with Ignaz Xaver von Seyfried. He was fourteen when, in Vienna in 1828, he first heard Paganini play—an experience which transformed his life. He followed the great Italian virtuoso on his travels, absorbing the special features of his technique through close observation, and eventually impressed him by being able to play, by ear, as-yet unpublished works that Paganini was featuring in his programmes. By that time Ernst had started making concert tours on his own account. At the age of eighteen he had settled in Paris, where he made his official concert debut in 1831 and became friendly with the composer-pianist Stephen Heller, who collaborated with him on a set of jointly composed pieces, the Pensées fugitives for violin and piano. Ernst left Paris in 1838. The previous year, aged twenty-three, he had finally appeared in concert with Paganini, in Marseilles; critical opinion agreed that Paganini surmounted the greater range of technical difficulties, but Ernst played with greater feeling.

For the next twenty years Ernst lived the life of an itinerant virtuoso, building a reputation as one of Europe’s greatest violinists, and befriending Berlioz (who conducted him in Harold in Italy in Brussels), Mendelssohn and Joseph Joachim. He travelled as far afield as Moscow, Riga, and eventually London, which he first visited in 1843. It was in London that he settled in 1855 and he continued to perform there regularly until the early 1860s. In Joachim’s opinion, Ernst was the greatest violinist he had ever heard, one who towered above all others. In 1859 Ernst and Joachim were the violinists of what must have been one of the greatest string quartets in history, the Beethoven Quartet Society, along with Henryk Wieniawski (who played as the violist) and the cellist Alfredo Piatti. The last decade of Ernst’s life was a period overshadowed by severe and incurable neuralgia, and in his last years he retired to Nice. There he produced his final compositions and died on 9 October 1865, just fifty-one years old.